From Old School RuneScape Wiki
Jump to navigation Jump to search
The RuneScape Wiki also has an article on: rsw:Mourning's End Part I

Mourning's End Part I is a quest in the elf quest series, continuing directly where Roving Elves left off. The player travels to Lletya, the hideout of the rebel elves, to assist their leader Arianwyn in bringing down the Iorwerth clan. The first half of this two-part quest revolves around infiltrating their base in West Ardougne.

Talk to Eluned, who teleports between three different locations. Refer to the map on the Roving Elves quest page for these locations. You may travel to any of them and then switch worlds to find her.

She will lead you to the rebel elven outpost Lletya. Talk to Arianwyn, the leader of the elves in this outpost. He will reveal to you that the mourners in West Ardougne are really Iorwerth elves from Prifddinas, and that it is your job to uncover their evil plot. He will tell that these mourners frequently cross the overpass of Arandar between the elven capital and West Ardougne, allowing you to easily ambush one there. Arianwyn then gives you a teleport crystal that allows you to teleport back to Lletya.

This crystal contains charges, with one being consumed per teleportation. It starts with four charges. If the crystal is used efficiently, this will be enough teleports for both this quest and Part II. Eluned is able to grant it three charges whenever it becomes uncharged, or five charges if the Hard Western Provinces Diary is completed. She charges a maximum of 750 coins for this service, although you would have to find her again first. 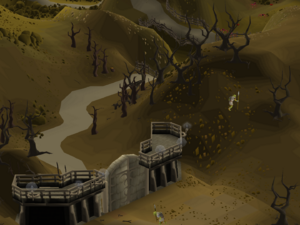 Head towards the entrance of Arandar. The fastest way is by travelling with the Necklace of passage to the Outpost, then walking westwards. There, kill a level-11 mourner to obtain their outfit. Right before you land your first hit, they will always throw a potion that reduces your combat stats to 20, including your Hitpoints. Stats reduced this way cannot be instantly restored with a potion. However, they may be restored with the Pool of Refreshment in the Ferox Enclave or the Fancy or Ornate rejuvenation pool in the player-owned house.

You will need everything that the mourner drops, excluding their bones:

Because the top is covered in blood, you will first have to clean it before it can be worn. Go to Taverley and talk with the druid Tegid, who is doing his laundry by the lake. He will however refuse to lend you his soap. Therefore, you must steal it from his laundry basket (with level 50 Thieving). While holding a bucket of water, use the soap on the bloody mourner top to clean it.

Travel to Lletya, optimally with the teleport crystal, to repair the pair of trousers. Talk to the elven seamstress Oronwen, who will be able to repair the trousers if provided with a bear fur and two silk. You may also purchase the required dyes (red, yellow, green, and blue) from her if you haven't them yet.

Wearing the full mourner gear, you may enter the Mourner Headquarters in West Ardougne, located in the north-east corner of the city. Enter the basement, where you will find level-108 mourners and their commander, Essyllt. Speak with him to show him your letter, and he welcomes you aboard.

Essyllt will explain you that their job is to keep the people of Ardougne believing in the plague. One of their ways of doing it involved dyeing Farmer Brumty's sheep. However, their colour is starting to vanish and they will need to be redyed, a task he assigns you to do. Normally, they use a gnomic device to dye them unseen from a distance, however it has broken down and the gnome tinkerer refuses to tell the elves how to repair it. The elf allows you to interrogate the gnome and hands you the broken device and a tarnished key to the torture chamber.

Speak with this gnome in the adjacent room to learn about the variety of torture methods the elves already tried on him. He will accidentally spill that he is vulnerable to having his feet tickled and that he craves for some toad crunchies, and then realises his mistake. Repeat what he said, and then use a feather on the gnome to tickle him, while having the toad crunchies or a premade t'd crunch in your inventory. Make sure to not give him the toad crunchies before tickling him, or you will need new ones.

The gnome will beg you to stop. Get him off the rack so he may fix the broken device, if you provide him with magic logs and leather. He will then hand you a fixed device. Talk with him again to ask him about the ammunition needed, which turns out to be dyed swamp toads that gruesomely explode when launched from the device.

Similar to how you have captured the toads during the Big Chompy Bird Hunting quest, you will require an ogre bellows. However, instead of filling it with swamp gas, you need to use dye on it. Using a dyed ogre bellows on a swamp toad results in an inflated toad of that colour. Once you have at least one toad in each of the four colours, travel to the coloured sheep north of Ardougne.

Load the gnome device with any coloured toad, and then wield the device. When near the flock of sheep in that colour, select Aim and Fire in Combat Options, and aim the crosshair at any of the sheep in the flock. Shoot by pressing the red button. Successfully firing will coat the entire flock of sheep.

Repeat this for the other three colours. When finished, return to Essyllt.

Items needed: Full mourner gear and a barrel of naphtha (or at least 10 coal to make the barrel).

Essyllt will tell you that someone has poisoned their stew recently, causing them to get plague-like symptoms. He will want to apply these symptoms on some of the citizens to stimulate the rumour of the plague. You will need to reproduce the poison.

Take a rotten apple north-west of the Mourner Headquarters. Rotten apples from elsewhere will not work. Go to Elena, the scientist you rescued during Plague City. Her house is north-west in East Ardougne. Ask her for help, and she will reluctantly give in. She hands you a sieve that you will need later. 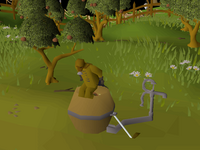 Travel to the apple orchard, located directly west of the Combat Training Camp, a short distance north-west from Elena's house. In the orchard, take a barrel and use it on a rotten apple pile. Then, use the barrel of rotten apples on the apple press. You will elegantly mash them up into an apple barrel.

You will now require a barrel of naphtha. If you already have one, skip to the Poisoning the Food section.

The location to obtain the coal-tar.

You now need to add a solvent to make the poison nonlethal and undetectable. Take another barrel from the apple orchard or Tyras Camp, and use it on the coal tar swamp south of Isafdar to get a barrel of coal tar. Then, gather at least 10 regular coal and go to the Chemist's house in Rimmington.

Follow these simple steps to obtain a barrel of naphtha:

When the green bar on the bottom is full, stop adding coal and close the window to replace your barrel of coal tar with a barrel of naphtha.

Use the barrel of naphtha on the apple barrel to get a naphtha apple mix. Then, use your sieve on it to obtain a barrel of toxic naphtha. Cook this product on a range, one is located inside the Mourner Headquarters, to turn it into two heaps of toxic powder. Place the powder on any two sacks of grain in West Ardougne. These are found in the general store, the church, or inside the office north of the manhole.

Go back to Essyllt once more, who will now trust you enough to disclose secret information. Their plan is to delve into the mountains, with the help of enslaved citizens of West Ardougne, under the pretext they fell victim to the plague. They will make a tunnel towards the Temple of Light, to make it easier to resurrect their "Dark Lord".

After talking to Essyllt, head back to Lletya (teleport crystal) and talk to Arianwyn to complete the quest.

Completion of Mourning's End Part I is required for the following: