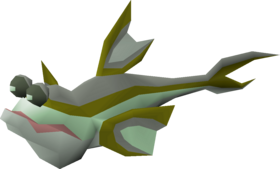 A mudskipper is an attackable fish found in the Mogre Camp. Large mudskippers are level 31, while their smaller counterparts are level 30.

Mudskippers are involved in Recipe for Disaster. While completing Pirate Pete's section of the quest, Nung asks players to collect five mudskipper hides before he will allow them into the crab pen area.

Lowlevel players can safespot them using the barriers at the entrance of the cave.

Drop rates estimated based on 40,362 kills from the Drop Rate Project, unless otherwise cited.