From Old School RuneScape Wiki
Jump to navigation Jump to search
The RuneScape Wiki also has an article on: rsw:Muncher
GrowlerMuncher? (edit) 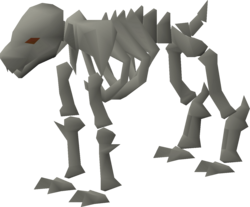 Muncher is Death's pet skeleton hellhound found sleeping within his office. He also appeared in Death's mansion during the 2014 and 2015 Halloween events.

In the 2014 Halloween event, it was revealed that he ate the postman and made a complete mess of Death's house, which forced Death to hire the player to clean up the place before his new servant arrived, as he didn't wish to seem completely incapable of looking after himself.

A player dies as he teases Muncher during the 2014 Halloween event.

During the event, he could be interacted with in a number of ways, including stroking him, trying to entertain him, and blowing a raspberry at him. If a raspberry was blown at him, he could kill a player instantly, although they would respawn in the mansion with all their items.