Murder Mystery is a quest that investigates the murder of Lord Sinclair. The culprit is random for each player, so some investigation must be done to determine the murderer. However, there are plenty of clues to be found around the Sinclair Mansion.

{"requirements":"None","desc":"Old man Sinclair has been found dead in his mansion! Unfortunately, the local authorities are having some trouble figuring out who's the guilty party. Maybe the unbiased eye of a passing adventurer will be of help.","difficulty":"Novice","kills":"None","name":"Murder Mystery","start":"The [[Sinclair Mansion]], north along the path between [[Seers' Village]] and [[Camelot]]. Talk to one of the guards around the mansion.","length":"Short","items":"* [[Pot]]"}

Murder Mystery is one of the most unique quests in RuneScape, because the outcome of the quest is random, so there is a reasonable amount of detective work you have to do on your own. However, there are plenty of clues to be found as to who the culprit is.

First, talk to the guard to activate the quest. Then, enter the house and search the murder scene, which is on the east side of the ground floor[UK]1st floor[US]. Inside will be a pungent pot, which you should collect, along with the criminal's dagger. Investigate the smashed window to find the criminal's thread.

Go around to the various bedrooms belonging to the suspects to find a number of silver items, all contained within barrels in each room. (There are four rooms upstairs and two on the ground floor[UK]1st floor[US].) Look for:

Now, it's time to get your first piece of evidence. Go to the main entrance of the mansion, and go north-east until you reach the guard dog enclosure. Investigate the sturdy wooden gate for more information.

Next, go to the gardener's shed (the small house on the ground level, west side of the outside of the mansion) and investigate the sacks to find flypaper. Take seven of these.

Go to the kitchen, and fill your pot with flour. Use it on the criminal's dagger; then, use the dagger on a piece of flypaper to get an unknown print. Dust each silver item with more flour, and use the flypaper to lift fingerprints from the items; then, compare them to the print of the criminal's dagger you found at the crime scene by using the flypaper pieces on the first flypaper print you got from the dagger.

Note: You may want to keep the silver necklace since it is a unique cosmetic item and cannot be obtained after completing the quest. If so, you will need to drop the item before completing the quest and pick it up afterwards. Otherwise, the item is taken from your bank or inventory upon quest completion.

Once you've got a match, you can drop all the silver items except for your proof.

You'll need more than just that for a conviction, though. Go to the entrance of the mansion, and talk to Gossip, and ask him who he thinks is responsible. 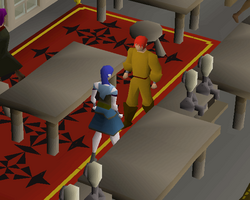 Talking to the Poison Salesman

Next, you need to gather info about the poison. There's a poison salesman, who sells it inside of the pub west of the bank in Seers' Village. Ask him to whom he sold the poison, and he'll tell you that everyone at the mansion bought some.

Go back to the house and ask the person who had the fingerprints on the criminal's dagger to find out what the poison was used on. Search the item they mention, detailed here:

You'll find that the subject was lying and didn't use their poison on what they had said they did.

Go back and talk to a guard and tell him you know who did it. Use the fingerprints of the person that did it on the unknown fingerprint. Show him the fingerprints, tell him about the poison, and show him the thread from the windowsill, since its colour will be a match to an article of the guilty party's clothing. Case closed! 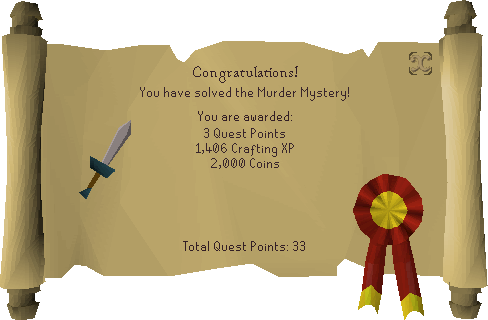