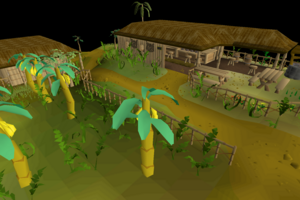 Musa Point is the northeastern edge of Karamja, located west of Port Sarim. It hosts a dungeon for members, as well as one of the only spots to cage and harpoon fish for free players outside of the Wilderness (aside from the Corsair Cove Resource Area).

Members can also enter via the gate to the east from Brimhaven or use an amulet of glory to teleport just south of the fishing spots.

When the player lands on Musa Point, they can then get off the boat to walk on the dock and explore the island. There are monsters near the northwestern part of the island around the volcano, so low level players are recommended that they stay away from that part of the island. It is a spot for level 14 scorpions, level 5 snakes, and level 3 monkeys. For lower/almost mid level players, it is a good training spot, as well as a Prayer spot, as monkey bones are dropped by the monkeys.

The Karamja General Store is located west of the boat players arrive on in the free-to-play part. Since this part of Karamja is far away from a bank, players rarely sell anything to this store. However, fishers on the island will sometimes sell their fish to this general store, allowing other players to buy them.

Karamja Wines, Spirits, and Beers is the bar east of the general store. The store is owned by a man named Zambo. Players can purchase beer, Karamjan rum and wine from Zambo.

There are few things players can do on the island.

This is one of the two places in the free-to-play world where players can fish for tuna, lobsters, and swordfish, thus making it the most popular fishing spot for non-members. It is also a popular chatting place among fishing players. Also able to Small Net Fish and Bait Fish.

Players can obtain water from a well on the west side of Zambo's bar.

Luthas' Banana Plantation is the small hut across from Zambo's bar. Players can collect bananas for Luthas and put them in the box outside his hut. When they've filled the box, Luthas will pay them 30 coins. Luthas is useful if a player forgot their money and cannot go back from the island. There are 33 banana trees in the plantation, each with 5 bananas on each tree. There is also a respawn point for an air rune north of Lutha's house.

Karamja Volcano is in the western part of the island. The volcano contains a dungeon underneath it. There are lesser demons farther west, while the entrance has a few mid-level skeletons. After completing Dragon Slayer, players can go through a hidden wall that leads to the Crandor crash site. On the rim of the volcano lie a multitude of dead trees. These trees can be cut for logs, which can subsequently be used to light fires; handy for high-level fishing and cooking at the docks.

Here some things you could need while Fishing:

If you want to make your own fire, also bring:

Note that there are two normal trees from which players can obtain logs for fires, close to the docks you will arrive at.

The charter ships also have a dock in the harbour in Musa Point. It provides rides to several other locations. After completing Cabin Fever, the charter ship fare is reduced by 50%. Wearing the ring of charos(a) also reduces the fare by 50%. These two bonuses can be stacked to reduce the cost to 25%.