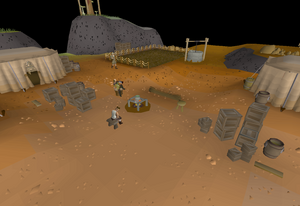 The Museum Camp is a location on Fossil Island. The Varrock Museum expedition resides here.

After arriving on Fossil Island via the canal barge, the player will be just west of the Museum Camp. At first, the camp will not be very useful, but players can utilise their Construction skill to build improvements within the camp.

In total, players will need the following items to build everything (28 Slots, A.K.A. one full inventory):

After building every camp improvement, players can speak to Peter just west of the rowboat for a reward of five unidentified small fossils, which can be stored in the nearby fossil storage crate. Along with 50 Mining and 150 kudos, claiming the reward from Peter is required to enter the Volcanic Mine.

Within the camp, players can also, with the help of tools such as the trowel, rock pick, specimen brush, leather gloves and boots (which can all be found in a crate next to the fossil cleaning bench), dig up numulites and unidentified fossils by using the tools on soil found in the archaeological digs all around the camp. Doing this grants 5 Mining experience per attempt.