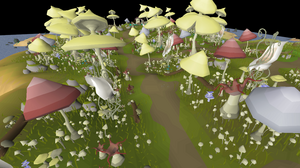 Mushroom Forest is a location on Fossil Island. It is home to a very large variety of flora, particularly mushrooms.

This area is notorious for causing frame rate drops for players with low-performance devices, due to the large amount of mushrooms on-screen at any given time. Players can consider zooming in their camera to reduce the number of visible mushrooms.

Scattered throughout the forest are level 109 Ancient Zygomites (in mushroom form). These can be killed as part of a Zygomite slayer task.

Within the Forest's south-east corner, there are three tree patches in which only teak and mahogany trees can be grown. Players can pay the squirrels to have them look after their hardwood trees while they grow.

Within the Mushroom Forest is a mycelium pool full of fungal life. Adding pyrophosphate and calcite (both of which are found around the island) will fuel a chemical process which will recalcify fossils into enriched bones which can be used to grant Prayer experience. The fossils which are used are non-tradeable, as are the resultant bones received. Players can speak to Irene to learn more.

Throughout the forest, herbiboars can be tracked similar to kebbits. To track them, players will require level 80 Hunter and 31 Herblore to harvest their herbs.

Tracking the creatures involves inspecting rocks, seaweed, muddy patches, and mushrooms around the area to find tracks, each inspection earning 50 Hunter experience, and occasionally giving numulite and/or unidentified fossils. By following the tracks more objects can be inspected to eventually reveal a tunnel containing a herbiboar. A ring of pursuit cannot be used to track herbiboars.

Once the player attacks the tunnel, Hunter experience is earned and herbs can be harvested from the creature. When harvesting herbs, the herbs received are appropriate for the player's Herblore level.

For players with a slayer task of Fossil Island Wyverns, a second Wyvern Cave can be found in the Mushroom Forest, beneath a trapdoor. This cave is task only, and is guarded by Weve. Ammonite Crabs can be found inside, and can be killed off-task.