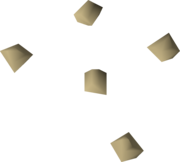 Mushroom spores are used in the Farming skill and require level 53 in the skill to grow them. They are planted at the mushroom patch west of Canifis (Fairy Ring CKS). Growth can take up to 6 hours and six mushrooms can be harvested. Successfully doing so is a hard task in the Morytania achievement diary. You cannot pay a farmer to protect this patch. Having an attas plant growing in the anima patch makes it possible to harvest more than six mushrooms per spore.

They can be obtained by pickpocketing from Master Farmers, which requires level 38 Thieving, from seed packs, or as a drop from various monsters.