Mutated bloodvelds are stronger variants of bloodvelds that require level 50 Slayer to kill. They are found within the Catacombs of Kourend, Iorwerth Dungeon and the Meiyerditch Laboratories.

Like regular bloodvelds, a mutated bloodveld's attacks are magic-based melee. They are known to damage frequently due to their high attack level, so equipping armour with high Magic defence is highly recommended to mitigate their attacks. They can also be safespotted with ease. Alternatively, players can opt to wear Prayer equipment while using the Protect from Melee prayer, using Prayer potions instead of food. Players can also teleport to an altar and then teleport back to the Catacombs instead of using prayer potions, since these bloodvelds are so close to the entrance.

Mutated bloodvelds are popular for players willing to spend time completing their task, as they provide better experience than normal bloodvelds. They also drop more blood runes at a higher rate compared to normal bloodvelds, in addition to the ancient shard and dark totem pieces they drop in the Catacombs of Kourend, and the crystal shards they drop in the Iorwerth Dungeon. On average, a player can expect to receive 3.6 blood runes per mutated bloodveld kill. 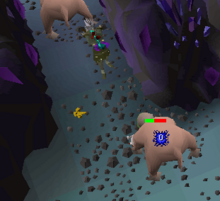 An example of a player using a corner to safespot a Mutated Bloodveld. 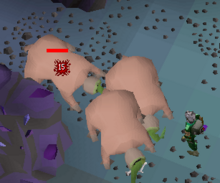 An example of a player using other Mutated Bloodvelds as a blockade to safespot.

Drop rates estimated based on 434,982 kills from the Drop Rate Project, unless otherwise cited.

The average Mutated Bloodveld kill while on a Konar task is worth 4,169.32.