The Muttadiles are bosses encountered in the Chambers of Xeric. It is a dog-like creature that has horribly mutated into a giant crocodilian beast. The original muttadile was pregnant at the time when Xeric transformed it into its current form and as such its offspring was warped too. The two beasts now act as guardians of the chambers.

The two muttadiles that reside in the chamber are present upon entering; a small one is on the ground and the large one is lurking in the water. The bosses are fairly notorious for constantly walking towards and away from players.

A meat tree is also present in the chamber which both muttadiles will start to eat from upon reaching ~40% of their health, eating up to 50% of their health (90% total) if triggered and will eat from the tree a maximum of three times, after which they become full and will no longer eat from it. The muttadile will not take damage when they are prompted to eat the tree. If a muttadile cannot reach the tree for a prolonged amount of time (either stuck by layout or frozen), it will give up and can be damaged normally.

The small muttadile attacks with both Melee and Ranged. While this smaller muttadile is alive, the larger one will stay submerged in the water, where it is unattackable and attacks players with erratic Magic that covers the entire chamber. The smaller muttadile prioritizes ranged from a distance, but due to the bosses' habit of walking in and out of melee distance, it may end up walking straight to the player or out of sight depending on layout. If it is within melee distance of a target, it will prioritize melee over ranged. 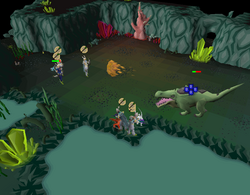 A group of players facing the larger muttadile.

When the smaller muttadile dies, the larger one emerges from the water and starts attacking the players in the room. Apart from having higher stats and using all three forms of combat, this larger muttadile will also perform a shock wave attack if anyone is within melee range, dealing massive damage to everyone in melee range, which can hit as high as 118. For this reason, it is advised to stay outside of its melee range at all costs. Various safespots are available depending on the layout and how it tries to walk towards players. Like the smaller muttadile, it prioritises ranged from a distance and melee up close. The magic attack is used at random.