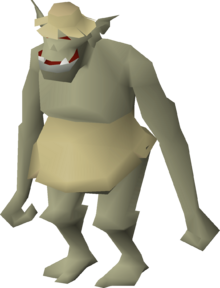 My Arm is a troll farmer at the Troll Stronghold. He is the main focus of the My Arm's Big Adventure and Making Friends with My Arm quests as well as Burntmeat's assistant.

His name "My Arm" derived from when he was just a baby. Trolls are named after the first thing they eat (or try to eat). Since he first tried to eat his dad's arm, his dad decided to name him My Arm.

My Arm loves Goutweed, as do most trolls. Therefore, when he found out that it was possible to grow goutweed, Burntmeat directed an adventurer to them. The adventurer taught My Arm how to farm, and helped him defend against a baby and giant roc who attempted to eat the goutweed. My Arm gained a Farming level as he picked the goutweed, and began growing goutweed to sate the mountain trolls' appetite for them.

When Wolfbone arrives to Trollheim, Burntmeat decides to send My Arm to Weiss to teach the trolls there the art of Farming. To ensure the trolls could still grow goutweed, he taught Drunken Dwarf's Leg how to farm before departing. The adventurer helps My Arm reach the city, where he shows Mother how to farm, but the troll leader is not interested in it. My Arm soon falls in love with Mother's daughter, Snowflake, but Mother disapproves. My Arm, with Snowflake, Odd Mushroom and the adventurer's assistance, "kill" the Wise Old Man, but Mother sees through their ruse and mortally wounds Odd Mushroom.

They later break out of the prison and confront Mother, who the adventurer slays in battle. They then perform a wedding ceremony for My Arm and Snowflake and he remains in Weiss to stay with his wife.