From Old School RuneScape Wiki
Jump to navigation Jump to search
The RuneScape Wiki also has an article on: rsw:My Arm's Big Adventure

My Arm's Big Adventure is the fourth quest in the Troll series. In the quest you must aid My Arm, a young troll who wishes to prove himself by growing his own goutweed. This necessitates gathering goutweed tubers, teaching My Arm how to farm, and fighting a Giant Roc which takes poorly to My Arm's farming attempt.

{"requirements":"*<span class=\"scp\" data-skill=\"Farming\" data-level=\"29\">[[File:Farming icon.png|21x21px|link=Farming|alt=Farming]] 29 [[Farming]]</span> <sup>(<span title=\"This requirement is boostable\" style=\"cursor:help; text-decoration: underline dotted;\">boostable</span>)</sup>\n*<span class=\"scp\" data-skill=\"Woodcutting\" data-level=\"10\">[[File:Woodcutting icon.png|21x21px|link=Woodcutting|alt=Woodcutting]] 10 [[Woodcutting]]</span> <sup>(<span title=\"This requirement is not boostable\" style=\"cursor:help; text-decoration: underline dotted;\">not boostable</span>)</sup> to cut thatches and repair the fence for Tai Bwo Wannai favour, otherwise you will have to kill monsters spawned by other players \n*Completion of the following quests:\n**[[Eadgar's Ruse]]\n***[[Druidic Ritual]]\n***[[Troll Stronghold]]\n****[[Death Plateau]]\n**[[The Feud]]\n**[[Jungle Potion]]\n*At least 60% favour in the [[Tai Bwo Wannai Cleanup]] [[minigame]] before starting this quest - this will be subtracted from the total favour","desc":"Trolls love goutweed. They love it so much that they've picked it all, and now they can't get any more. However, in his smelly kitchen in the Troll Stronghold, Burntmeat the cook has heard a rumour that goutweed is growing once again, for anyone who's got the skill to farm it. Can you teach his young assistant - a simple troll known as My Arm - to grow the precious goutweed? Will you overcome My Arm's stubbornness and ignorance to earn yourself Burntmeat's reward? Dare you accompany My Arm on this uniquely trollish expedition?","difficulty":"Experienced","kills":"*[[Baby Roc]] ''(level 75)''\n*[[Giant Roc]] ''(level 172)''","name":"My Arm's Big Adventure","start":"The kitchen, deep in the [[Troll Stronghold (location)|Troll Stronghold]]. Talk to [[Burntmeat]].","length":"Medium","items":"*[[Bucket]] (can be obtained during the quest, south of the cooking pot on [[Death Plateau (location)|Death Plateau]])\n*3 [[Ugthanki dung]], or the following materials to gather it:\n**[[Red hot sauce]] (obtainable in [[Pollniveach]]) '''or''' the [[Camulet]] (from [[Enakhra's Lament]] quest)\n**[[Spade]]\n**3 additional [[bucket]]s\n*Several farming supplies, which can be stored by any [[Tool Leprechaun]] and withdrawn from the [[Tool Leprechaun (Larry)|Trollheim Tool Leprechaun]] - except for Supercompost, these may also be purchased from this Leprechaun:\n**8 [[Supercompost]] (must be Supercompost)\n**[[Spade]]\n**[[Rake]]\n**[[Seed dibber]]\n**[[Plant cure]]"}

Items needed: Bucket (can be found next to the cooking pot at Death Plateau) 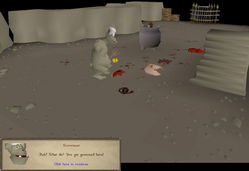 To start the quest, travel to the Troll Stronghold and speak to Burntmeat. He is found in the Troll kitchen, go south after going down the stairs. He has heard from another adventurer that humans can grow goutweed and wonders if you can help. You will see a short cutscene with this adventurer in a cooking pot, with his dragon armour strewn over the floor. Burntmeat wants his assistant, My Arm, to learn how to farm.

My Arm is at the back of the room; talk to him, and he will tell you he needs the goutweedy lump from the cooking pot on Death Plateau. Either talk to Burntmeat and follow his instructions to get to the Death Plateau or travel there via other means such as the games necklace.

When near Death Plateau, it is advisable to activate Protect from Ranged against the rock throwers and Protect from Melee while on the plateau. There, use a bucket on the cooking pot to get the goutweedy lump. There is a bucket spawn in a nearby hut.

Return to the Troll Stronghold and talk to My Arm again, who will promptly eat the goutweed. He will then guide you to his farm on the roof of the stronghold. Speak with him there, and he will give you a farming manual that he asks you to read.

Items needed: Three buckets of Ugthanki dung (obtainable with three empty buckets, a spade, and either red hot sauce or the Camulet) and seven supercompost

You now need to get the fertiliser for the goutweed: three buckets of Ugthanki dung and seven supercompost. There are two ways to obtain Ugthanki dung; using red hot sauce or the Camulet.

Go to Pollniveach, and ask Ali the Kebab seller for a bottle of red hot sauce. Use the sauce on the food trough in Ali the Camel Man's pen and wait a few seconds for it to have an effect. Then, gather the dung with the three buckets.

Travel to Al Kharid. While wearing the Camulet, speak to any camel around the city to have them produce some dung for you. You may have to talk to another if one refuses. Use the three buckets on the dung to collect it.

Once you have the Ugthanki dung and 7 buckets of supercompost, head back to My Arm on the roof of the stronghold. Treat the patch with seven supercompost and three Ugthanki dung while carrying a spade in your inventory. The patch is indicated by a farming icon.

Items needed: Machete (only if you lack 60% favour in Tai Bwo Wannai Cleanup) 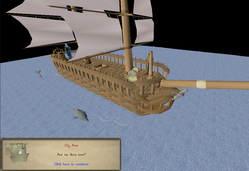 The player and My Arm heading to Karamja.

Having fertilised the patch, talk to My Arm again. He will want to venture with you to Tai Bwo Wannai, as goutweed supposedly originates from there. You'll see a short cutscene on the docks of Ardougne, followed by a scene on the ship. Once you arrive at Brimhaven, My Arm will have already run off towards Tai Bwo Wannai. You can find him just east of the general store. Talk to him there.

If you haven't enough favour in Tai Bwo Wannai Cleanup, you will need to partake in this minigame. For this, you'll only require a machete. You can buy a machete from the general store. Optionally, you can continue until you reach 100% favour in the minigame for the Karamja Medium Diary.

When you have 60%, talk to Murcaily. Note that doing this will subtract this percentage from your total favour, so you may first want to reach 100% for the diary. Murcaily will initially give you a single hardy gout tuber. Then, cutscene will follow in which My Arm causes havoc around the village in search of the tubers, and Murcaily will give you lots of hardy gout tubers. You will then return to Ardougne.

Items needed: Combat equipment, the hardy gout tubers, and 69 coins or a rake, seed dibber, spade and either plant cure or supercompost

Speak with My Arm again - he suggests you go back to the bank to get some food because of some "large birds" on top of the mountain. You will need to bring the required farming tools or ensure your tool leprechaun has them. You should also bring decent armour, weaponry and food.

Go back to the top of the Troll Stronghold where My Arm is. You can retrieve or purchase the tools from the nearby tool leprechaun nearby.

You'll need to give My Arm the materials to plant his tubers, as if you were planting them yourself. Give him the tools in the following order;

When the goutweed is planted in step #3, the Drunken Dwarf will appear before getting unceremoniously thrown off the roof of the stronghold by My Arm, and then eaten by an unnamed troll child.

After the goutweed finishes growing, a bird will swoop down and attack the goutweed - it is only a level 75 Baby Roc and defeating it should be fairly easy. 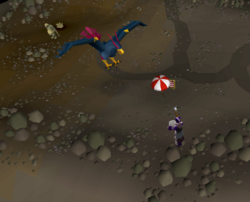 An ideal spot to fight the Giant Roc. Note that you can still get hurt by the wing blasts and ranged attacks.

However, this will anger a far more dangerous level 172 Giant Roc, who will immediately attack you. It uses both Melee and Ranged attacks. The melee attack will also force you backwards unless your back is against a rock or wall. Its ranged attacks may be dodged, although this requires precise timing. It is recommended to fight with Protect from Missiles activated and eat when required. The Giant Roc is more resistant to Magic damage than other types of damage, so it is advised to use Ranged to damage it. My Arm will also attack the bird, but his attacks only tend to hit 1 to 3, so don't rely on this.

Once it has been defeated, talk to My Arm again. You will now need to give him a spade to dig up the goutweed. If you forgot the spade, climb down the ladder and back up for the leprechaun to reappear. My Arm will then tell you to speak with Burntmeat for your great reward - you guessed it, a full inventory of burnt meat!

Talk to My Arm one last time to complete the quest. He will offer you some better rewards. 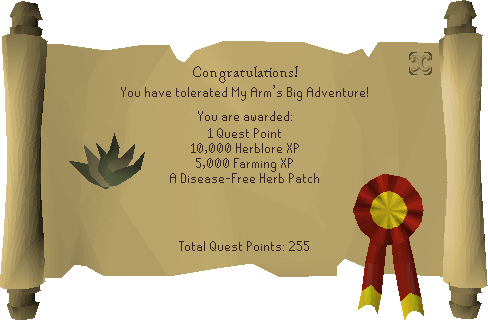 Completion of My Arm's Big Adventure is required for the following: