A Mysterious Voice is heard while inspecting the Unstable Altar in the cave west of Mount Quidamortem that is visited during the Tale of the Righteous quest. Though she shouts "Rickard! Turn away! Don't do this!", she is never seen directly during the quest.

While the identity of the mysterious voice is not known, it is known that the person the voice mentions, Rickard, is Lord Rickard Shayzien, who was the leader of Shayzien during the 32nd decade, during the reign of King Hosidius V. It is presumed King Shayzien VII would shortly take over Great Kourend, as his rule begins during the early days of the 33rd decade. 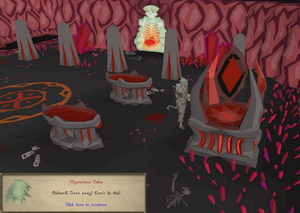