The Myths' Guild is a guild located on the south-western tip of Feldip Hills. It is accessible only to those who have completed the Dragon Slayer II quest.

Founded by the Sect of Uhld, the Guild's primary goal is information preservation,[1] as well as distinguishing fact and myths throughout history, all of which are archived in the guild's Library of Knowledge.[2]

There are several ways to get to the Myths' Guild:

On the ground floor, players will find the Mythic Statue, which leads to the guild's basement, and four magic trees, along with Ellen, Freja, and the Mysterious Adventurer.

Next to the entrance is the Pool of Dreams, allowing a rematch with Galvek, the Dragon Slayer II boss, and the option to rewatch cutscenes from the same quest. The Dream List next to it tracks the player's kill count and best kill times.

In the north-west corner is a ladder which leads the player to the Myths' Guild's Library of Knowledge on the 2nd floor[UK]3rd floor[US].

The music track, Mythical unlocks when you enter.

On the 1st floor[UK]2nd floor[US], there is a bank chest with a range one square away diagonally, providing an efficient place to train Cooking.

Primula is located on this floor, who can teach players how to make super antifire potions.

Lutwidge can be found in the adjacent tower, accessible via a ladder in the north-west corner on the ground floor.

The 2nd floor[UK]3rd floor[US] contains three teleports to the Champions', Heroes' and Legends' Guilds. Players can also find an altar, an anvil and three shops.

Diana sells dragon weaponry, Erdan sells the Shield right half and Dragon metal shard, and Jack sells the mythical cape, which is able to teleport players to the guild.

The Myths' Guild's Library of Knowledge is located on this floor, which is accessed from the ground floor from a ladder in the north-west corner of the guild. Here, players can search the bookshelves to find six texts: 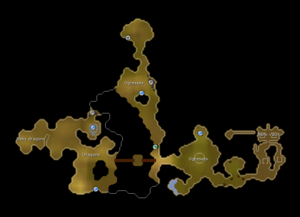 Beneath the Mythic Statue on the ground floor lies the basement of the Myths' Guild, which is the western part of the Corsair Cove Dungeon; the basement can also be accessed by crossing the bridge from the eastern side of the dungeon, where Ponts the Bridgemaster guards the barrier.

In the southern portion of the dungeon lies several chromatic dragons, along with six blue dragon scale spawns.

The southern exit of the basement leads to a small island south of the guild, and contains the Wrath Altar, where players can craft wrath runes.