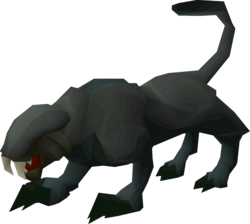 Nail beasts are encountered on all three paths of the Temple Trekking minigame and are the only monster to drop nail beast nails. The combat levels of Nail beasts are based on the difficulty (length) of the event chosen: they are level 69 on easy (long), level 98 on medium (medium), and level 141 on hard (short). The number encountered also depends on the chosen escortee: with an easy escortee, players will see between two and three Nail beasts, with a medium escortee they will see between three and four, and on with a hard escortee anywhere between four and six will appear.

They are not very strong, but they hit 3 times every attack (3 times in 7 ticks) and are very accurate, even against high-defence armour. Players should keep an eye on their follower's Hitpoints and on their own. Prayer will not block the second or third attack if the first attack hits the player. Nail beasts are prone to wander at the beginning of the encounter, allowing the player to round up the closest Nail beasts; the third Nail beast will usually be on the other side of the map. Unless the follower decides to walk in its direction, attacking it is not necessary until it is the final remaining Nail beast.

Nail beasts are weak to Sanfew serums if they are "used" on them, which deals 20-40 damage per dose and grants melee experience. This requires the player to have no weapons equipped; if they do, it will automatically be unequipped if there is space in their inventory.