Nature Grotto is a small cave located deep within the Mort Myre Swamp. It is located north-west of the village of Mor'ton and directly east of the Exam Centre, though of course across the river. You may pray at the altar of nature in the cave, earning you 2 extra Prayer points until spending them.

The Nature Grotto first appears in the quest Nature Spirit, of which it is a vital part of the quest. Jumping across the broken bridge will bring you to the cave entrance – a black hole in the mound – and Filliman Tarlock.

Players with at least 50 Agility and access to the fairy rings system may access the grotto by using the fairy ring code BIP to teleport to the small island to the west. 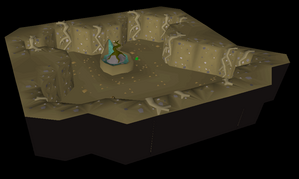 The grotto before it is restored.
Retrieved from ‘https://oldschool.runescape.wiki/w/Nature_Grotto?oldid=14272243’
Categories:
Hidden category: