Necklace of anguish (or)

While the necklace is untradeable in its ornamented state, it can be dismantled anytime, returning the tradeable necklace and ornament kit.

Many players purchase the ornament kit for the purpose of making the item untradeable, thus allowing the player to always keep it on death against NPCs. 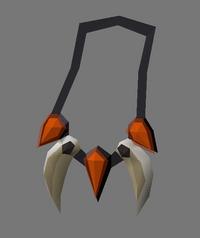