The Necromancer Tower is a tower south of East Ardougne where a few necromancers reside.

The Necromancer Tower is south of East Ardougne and north-east of the Tower of Life. Besides walking, the tower can be easily reached by two teleport methods:

The closest bank without using teleportation is the one south of the marketplace in East Ardougne. The map shows the shortest route between the bank and the Tower of Life, and the same route can be used for the Necromancer Tower (note that players do not have to go through the Ardougne Zoo using this route). If players can use fairy rings, then the bank in Zanaris is closer. 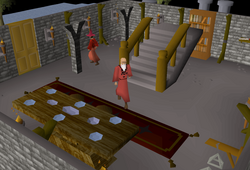 The ground floor of the tower.

Players can speak with Irwin Feaselbaum, who talks about the disruptions that occur all the time when adventurers confront his boss, Invrigar the Necromancer. Players cannot fight Irwin.

If players search a bookcase on this floor, they will discover that a book is 'On loan to the Wizards' Guild...to be returned.' This is probably a reference to the Necromancy book in the possession of Sithik Ints at the Wizards' Guild. 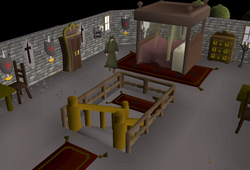 The upper floor of the tower.

Invrigar the Necromancer lives on this floor. If you fight him, he will occasionally call up Summoned Zombies that also attack you.