From Old School RuneScape Wiki
< Nex
Jump to navigation Jump to search
The RuneScape Wiki also has an article on: rsw:Nex/Strategies 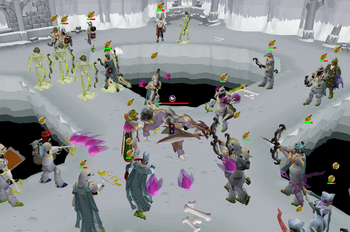 A group of players battling Nex.

Nex, the Zarosian general of the Ancient Prison, is one of the most powerful bosses in Old School RuneScape. It is strongly recommended that players fight her with a team, as it is extremely difficult to solo Nex.

To access the Ancient Prison, players must complete The Frozen Door miniquest, which requires assembling the frozen key. The four pieces of the key are obtained by defeating the four generals of the God Wars Dungeon. As such, level 70 in Ranged, Strength, Agility, and Hitpoints are required in order to obtain the key. The key pieces are a guaranteed drop from the generals, while their bodyguards drop the key pieces at a rate of 1/20. Unlike RuneScape, the frozen door is permanently unlocked once the frozen key has been used. 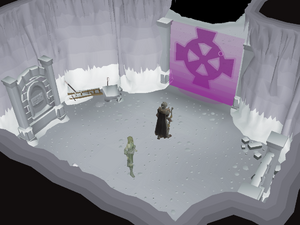 The safe room, where Ashuelot Reis provides banking services. The ancient barrier, purple in colour, indicates that Nex is not currently being fought.

Having a Zaros related item equipped will make the spiritual fighters and Blood Reavers unaggressive. This is useful since a player must run past these monsters to gain access to the safe room between the main area and Nex's chamber. To get to the safe room, players must gain 40 ancient essence, from killing these monsters. This requirement can be bypassed by using an ecumenical key, or lessened with completion of the various tiers of Combat Achievements. Unlike essence gathering in the main area of the dungeon, killing Zarosian soldiers grant varying amounts of essence:

Nex herself, along with the mages and reavers, have an occasional chance of providing an additional kill count upon death.

The safe room is where the nature spirit Ashuelot Reis provides banking services, in which players can properly prepare for the fight against Nex. Once your team is ready for the fight, go past the ancient barrier to enter the chamber.

Regardless of team size, it is encouraged to get at least 80 or 120 kill count prior to entering the lobby area so that the reserved kill count can be used for immediately re-entering the room in the event of a teleport via the altar or needing to restock supplies.

The battle against Nex is fought in a circular room that resembles the symbol of Zaros. Nex moves very quickly; she can jump across the room in two ticks, and is able to leap across the pits. The battle has five phases: Smoke, Shadow, Blood, Ice, and the Zaros phase. There are four level 285 mages in the four corners of the room. These mages are Fumus, Umbra, Cruor, and Glacies, and they represent the four elements of the Ancient Magicks Nex uses in the first four phases.

Nex possesses high health but fairly low combat stats and defensive bonuses for her level - however, she should still not be underestimated. While she is weakest to stab attacks, ranged is also needed for the shadow and Zaros phases and her bodyguards. The bodyguards have fairly high Defence with varying defence bonuses, with three of them being slightly weaker to melee than they are ranged. Regardless, bringing melee and ranged is recommended for smooth and fast kills in smaller teams.

During the fight, Nex uses Ancient Magicks of the same type as the mage of that phase with a range of 10. Nex also has a standard melee attack that can hit players within melee distance, hitting up to 30.

If Nex is unable to attack her target for too long, she will fly elsewhere in the room and resume attacking. Player attacks are interrupted when she does this and must be reinitiated.

Nex's chamber can only be accessed when she is not being fought, or when the chamber is glowing purple. If players are battling her, the barrier to her chamber will be glowing red and will remain that way until the fight ends. To leave her chamber, use the altar across the room to teleport out. The altar will teleport players right outside the bank area, so make sure to have appropriate Zarosian protection before teleporting.

Praying at the altar while wearing at least one Zarosian item will restore Hitpoints, Prayer, Special attack, and Run energy. This can be done once every 10 minutes.

If players die during the fight with Nex, they may reclaim their items via the chest found in the safe rooms immediately after entering the frozen door, as well before Nex's chamber. Reclaiming items in the chest will cost 100,000 coins. Bring Saradomin and Zamorak-affiliated items; if intending to head straight back into Nex, bring a Zarosian item too if it is not one of the items held in the chest. Dying elsewhere without reclaiming items in the chest will cause them to be lost for good. 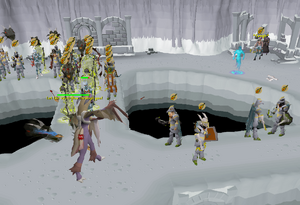 A single player, on the top right of the image, purposely receives Nex's Choke attack by having the least amount of magic defence bonuses.

On the left, other players distance themselves from her to avoid spreading the virus.

Nex's first phase, the smoke phase, starts when she shouts Fill my soul with smoke! During this phase, Nex will use Smoke Rush against players, which can poison. This is the only phase where her basic magic attacks do not drain prayer. All players should stand within melee range of her, a strategy known as melee distancing (MD), which will cause her to use her melee attack which only targets one player, as opposed to her magic attack which targets multiple players and deals more total damage. While in melee distance, the player being targeted by Nex may use Protect from Melee to reduce the overall damage taken, and then immediately switch to Protect from Magic once Nex switches targets.

Nex will always start this phase by using her Choke attack. In smaller teams that are melee distancing, each player should spread out to avoid spreading the virus. Once a player has received the virus, the other players no longer need to distance themselves from each other and should move to a position that allows space for the infected player, in case they are targeted by the Drag special attack.

After Nex reaches 80% health (2720 hitpoints), she will shout Fumus, don't fail me! Now, her mage Fumus will become vulnerable and must be killed to proceed to the next phase. Fumus is weakest to stab attacks, although ranged is still reasonable. 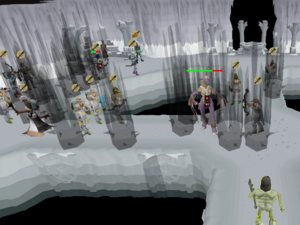 Nex's second phase, the shadow phase, starts when she shouts Darken my shadow! During this phase, Nex will shoot shadow shots which are considered as Ranged attacks. Having Protect from Missiles active will cut the damage taken in half. Successful hits can drain prayer points slightly, which can be reduced by the spectral spirit shield.

Players will take more damage from the shadow shots the closer to Nex they are, up to 30 with Protect from Missiles, so it is advised players keep their distance and maintain high hitpoints at all times on this phase in case Nex happens to glide immediately next to players and begin attacking right after.

Players that are targeted by Nex should try to lure her away from Umbra. This allows the entire team to attack Umbra, once she is vulnerable, while maintaining a safe distance away from Nex.

After Nex reaches 60% health (2040 hitpoints), she will shout Umbra, don't fail me! Now, her mage Umbra will become vulnerable and must be killed to proceed to the next phase. Umbra is weakest to ranged attacks. 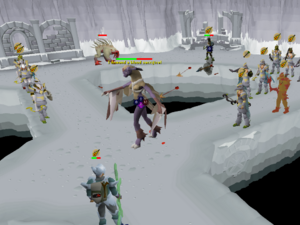 A player is marked in red as part of Nex's Blood Sacrifice attack.

Nex's third phase, the blood phase, starts when she shouts Flood my lungs with blood! During this phase, Nex will use Blood Barrage against players, which heals her a percentage of the damage dealt and drain prayer based on the damage dealt which can be reduced by the spectral spirit shield.

Unlike the rest of the fight, this attack only targets one player, although it has a 3x3 AoE centred on the current target. The player targeted by her should move away from other players to reduce damage and effectively Nex's healing.

After Nex reaches 40% health (1360 hitpoints), she will shout Cruor, don't fail me! Now, her mage Cruor will become vulnerable and must be killed to proceed to the next phase. Cruor is weakest to slash attacks, although ranged is still reasonable.

Any blood reavers that persist will be automatically killed once Nex starts the next phase. 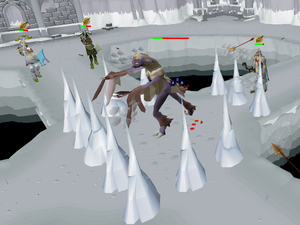 Nex's fourth phase, the ice phase, starts when she shouts Infuse me with the power of ice! During this phase, Nex will use Ice Barrage against players, which will freeze them if they are not praying Protect from Magic and lowers their prayer points by half of the damage she deals, reduced to one third by the spectral spirit shield. Players should stand in melee distance (MD) similarly to the Smoke and Zaros phases. Players should be wary of the 'Containment' special attack when standing in melee distance, especially after Glacies has been activated to avoid being frozen in place.

After Nex reaches 20% health (680 hitpoints), she will shout Glacies, don't fail me! Now, her mage Glacies will become vulnerable and must be killed to proceed to the last phase. Glacies is weakest to crush attacks, although ranged is still reasonable. 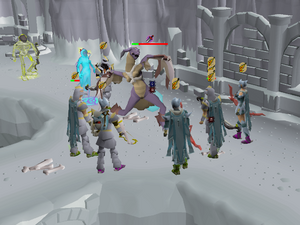 Players staying within melee distance of Nex to minimise damage from her magic attacks.

Nex's fifth and final phase, the Zaros phase, starts when she shouts NOW, THE POWER OF ZAROS! During this phase, Nex will call on Zaros' power, healing her for 500 hitpoints, and will only use her normal magic and melee attacks. Her magic attacks drain 5 prayer points if they hit, which can be reduced with the use of the spectral spirit shield.

Similarly to the smoke and ice phases, all players should run up to Nex to reduce the team's overall damage taken. Players with the lowest crush defence bonus are targeted more frequently by her melee attack.

In addition, she will use several ancient curses, which are Zarosian prayers, in this final phase of the fight:

In order to access Nex's Prison, you must first pass through the Zarosian encampment. In order to do so safely, it is highly recommended that you wear a Zaros-affiliated item until you have passed safely beyond the essence-consuming door. Teleporting out of the arena will place you in this dangerous area, so it is recommended you keep this item with you at all times. For the purposes of the following section, consider the following:

If using a crossbow setup, a Toxic blowpipe or a Twisted bow (with Dragon arrows) should be brought to hit Fumus, Umbra, Cruor, Glacies and Blood Reavers.

At least two players should also bring a crush weapon in order to free trapped allies during the ice prison special attack. Players without a melee weapon can unequip their weapon to attack the ice prison unarmed, however this will often fail and is not recommended.

To significantly increase overall DPS, thralls are highly encouraged as they ignore Nex's defensive bonuses and count towards the player's kill contribution. Greater thralls require fire, blood and cosmic runes in order to be summoned and should be put in a rune pouch. A rune pouch should still be taken nonetheless if the player cannot or will not summon thralls, as to pick up Nex's blood, death and soul rune drops.