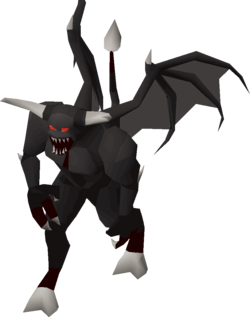 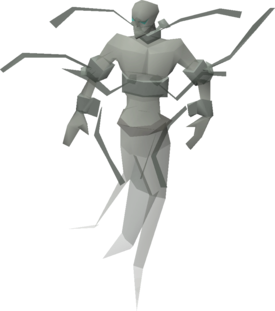 Nezikchened is a level 187 black demon that has to be defeated three different times during the Legends' Quest. He is also among the strongest demons in the game. At the start of each fight he drains a player's prayer points. Like all demons, he is also vulnerable to the effects of demonbane weapons. He has a very peculiar habit of calling the player 'Vacu'. According to the Shaman Ungadulu 'Vacu' was the name for the evil priests who served the 'demons of the underworld'.

Despite being a black demon, he is not considered one for the purpose of a Slayer task. He can be fought in the Nightmare Zone after the quest is complete, but will not drain prayer points there.

Nezikchened has possessed Ungadulu, the shaman of the Kharazi Jungle. Players must use the book of binding on him to reveal his true form. He will then drain the player's prayer and attacks with melee, or magic if the player is out of reach. He can be easily defeated if you use protect from melee while standing next to him while keeping your prayer points above 0 by drinking prayer potions. Stabbing him with demonbane weapons or throwing a vial of holy water at him can weaken him. This is thought to be the easiest of Nezikchened's three phases, as it is very predictable and only one prayer will be needed. Recommended attack style for players is ranged, due to its inherent accuracy, melee works nearly as well. It's not recommended to use magic unless you have a high magic level (75+), as his magic level of 160 makes him highly resistant to spells.

Nezikchened appears again disguised as the ghost Echned Zekin, an anagram for Nezikchened, and will ask players to kill the spirit Viyeldi. Players who do so will save time initially but will have to fight Ranalph Devere, Irvig Senay and San Tojalon in the final battle. Players who do not wish to kill Viyeldi can go back and speak to Ungadulu who will give the player a Holy force card, which can be used to weaken Nezichened. Whichever path they choose, when players return to Echned Zekin, he will turn into Nezikchened and fight the player. Just like before he drains the player's prayer, unless they use the holy force spell card on him first. He will begin attacking you with a weak magic attack at first, but then switches to melee. He may also throw a dagger at you (if the player took the short route and killed Viyeldi) which may do some amount of damage. Assuming he uses the attack at all, the demon will only throw the dagger once throughout the course of the fight. This fight is relatively similar to the first one, in terms of difficulty.

At the end of the quest, players must fight the demon one last time. Before you begin the fight it's recommended you turn on Protect from melee, as the demon will get a few free hits while the player is stalled. He will, like before, drain prayer at the beginning and then proceed to attack with melee, or a hard hitting magical attack if the player is out of melee range. An effective way to defeat the demon involves safespotting him by hiding in the trees nearby and attacking him with ranged. Melee can also be used but players should be wary, as his melee attack has a chance of hitting you through protect from melee.

If players chose the "short" route during the quest, he will also spawn Ranalph Devere, Irvig Senay and San Tojalon one at a time in an attempt to weaken the player. Make sure your prayer points are high and protect from melee is on after you kill a skeleton, as you'll be unable to act for a few seconds.

After the player has delivered the final blow to Nezikchened, he will exclaim "I am beaten by a mere mortal...I will revenge myself upon you!" and the player automatically and sarcastically responds "Yeah, yeah, yeah. Heard it all before" right before Nezikchened bursts into flames and dies as he burns into ashes.