Nieve (pronunciation: /ˈniːv/ "NEEV") is the second-to-highest level Slayer master, behind Duradel. She is located in the Tree Gnome Stronghold, next to the Stronghold Slayer Cave near the magic trees and the southern bank. She only assigns tasks to players with a combat level of at least 85.

Nieve wields a Zamorakian hasta, full Bandos armour, an amulet of fury, a pirate's hook, an elysian spirit shield, and a fire cape. She made an appearance with a cave kraken in Prifddinas during Old School RuneScape's first birthday event along with other NPCs.

Players can receive Slayer reward points for completing Slayer tasks—this is based on how many tasks players have accomplished in a row. Completion of a task assigned by Nieve will grant you a varying amount of points, depending if players have completed the elite Western Provinces Diary, which is increased to match those of Duradel.

Unlocking abilities to increase your task numbers for certain Slayer monsters can be done by spending Slayer reward points from any Slayer master.

Nieve has many cousins, all of whom operate slayer task only areas, like her. Steve resides in the Asgarnia Ice Dungeon and controls the upper level in the Skeletal Wyvern area. Slieve and Eve operate out of the Taverley Dungeon, controlling the Black and Blue dragon areas, respectively. Captain Cleive controls access to the Lizardman shaman slayer caves. Lieve McCracken oversees Kraken Cove. Hieve runs a separate metal dragon area in the Brimhaven Dungeon, and is the older brother of Pieve and Steve. Weve guards the Wyvern Cave for on-task wyverns and ammonite crabs on fossil island. Lastly, Nieve's uncle Breive maintains the Smoke Devil Dungeon.

After Monkey Madness II, Steve moves to the Gnome Stronghold and takes over Nieve's role, and Pieve takes over Steve's role in the Asgarnian Ice Dungeon.

In Monkey Madness II, she is recruited by the player to stop Glough and his experiments from wreaking havoc after his airship crashed north of the Tree Gnome Stronghold. Nieve helps the player against the tortured gorillas invading the Stronghold. 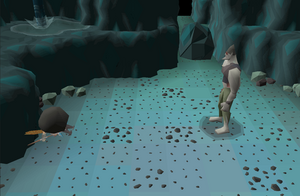 Nieve is killed by a collapsing boulder.

After the 10th Squad secures the Stronghold, she, along with the player, pursues Glough in the Crash Site Cavern, where she assists the player in defeating Glough's tortured and demonic gorillas. After Glough drinks the serum to mutate himself, Nieve charges at him, despite the player's warnings. The mutated Glough easily bats Nieve aside before stomping the ground, causing a boulder to fall and kill her. The player ultimately avenges Nieve's death. 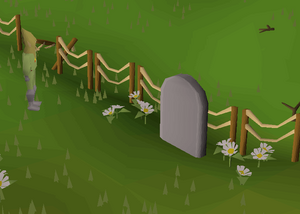 Nieve's gravestone found at the exit that leads to the crash site.

After the quest, her gravestone can be found between the small swamp and the Grand Tree's north-western entrance, next to the exit that leads to the Crash Site Cavern. Her gravestone also functions as the player's kill count for tortured and demonic gorillas. Her younger cousin, Steve, replaces her as the Slayer Master, and Pieve replaces her brother at the Asgarnian Ice Dungeon.

Following her death, Nieve was sent to the afterlife, where she met and got along with Yanes. Even in the afterlife, Nieve is kept occupied and was unable to attend Eve's party, but kept telling him about the adventurer, whom Yanes met in the party. The adventurer misses her, stating that it isn't the same with Steve around.

At some point, Icthlarin recruited her to fight off servants of The Devourer in the land of souls. [1]

Nieve is the solution to the medium anagram clue: I EVEN. The answer to her challenge is 2.