The Night beast is a superior variant of the dark beast. It has a chance of spawning after purchasing the unlock Bigger and Badder for 150 Slayer reward points from any Slayer master. Like their standard variant, they will only use their Magic attack if attacked first (which will always be the case since they are not aggressive) or from afar.

The night beast has a special attack where it will briefly stop attacking then it uses Magic for three attacks which resemble Fire Blast, covering a 3x3 area dealing damage based on the player's current Hitpoints. It is best to have Protect from Melee active and take the hits, as the attack will never kill the player due to the damage being based on current Hitpoints. Alternatively, the attack can be avoided by moving away from the targeted area. 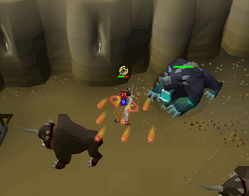 A player is hit by the night beast's area-of-effect attack.

Drop rates estimated based on 47,056 kills from the Drop Rate Project, unless otherwise cited.