From Old School RuneScape Wiki
Jump to navigation Jump to search
This article is about the beta version. For the released version, see Nightmare staff. 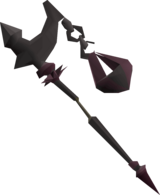 The Nightmare staff is a staff requiring level 65 Magic and 50 Hitpoints to wield. It is only available from the tournament supplies table in a tournament world as a test weapon for players. It is one of the proposed rewards for Nightmare of Ashihama. It can autocast offensive standard spells as well as Ancient Magicks.

Once belonging to the shamans of Ashihama, it's true name has since been lost to the world, and is now associated with The Nightmare.

Players can attach three different orbs to the nightmare staff to give it differing effects; this increases the requirement to wield them to 75 Magic: