From Old School RuneScape Wiki
Jump to navigation Jump to search
The RuneScape Classic Wiki also has an article on: classicrsw:Noob
This article is about the term being directed as an insult toward other players. For the term referring to one's secondary account, see Noob account.

Noob, Newb, Nub, or Newbie are terms used amongst RuneScape players and much of the gaming communities in general. Both "noob" and "newb" are used to refer to a new player or newcomer who generally has an incompetent or low Combat or skill level.

Despite it being an insult, it is popular as players cannot be reported for using it[1] unless it is done to such a degree that it constitutes spamming, which would have to be sufficient "to render the chat window useless". This is in violation of Jagex's Code of Conduct, and it may result in temporary mutes or other punishments.

In May 2009, various news sources reported that "noob" was a candidate to be the supposed “millionth word” (by the metrics of the Global Language Monitor) in the English language, which was expected on 10 June[2]. At that time, the word was already defined as "a derogatory name for someone new to a particular task or community"[3]. However, "noob" was ultimately claimed as the 999 998th word, with the millionth being Web 2.0 on 10 June.

A "froob" was a term used for someone who has never left Lumbridge, although players themselves normally use this term as an insult towards those unfamiliar with members' worlds. "Choob" usually means an inexperienced high level player or a high level that acts like a noob, but can be used to describe a J-Mod's noob account.

"Noob" is used by many people simply as an insult regardless of the context, as it is an insult, which is not a reportable offence. Even a player of a much lower level may still call another player "noob" for being annoying to them, or for doing something that an experienced player, in their opinion, should know better than to do.

While many players use "noob" to describe a new (usually low-level) player, this is not the only meaning. The word "noob" is also used to describe someone who begs or sabotages something (sometimes unintentionally), such as destroying barricades in Castle Wars or placing them in inconvenient locations, or killing brawlers in Pest Control that are blocking other pests, or setting up a Dwarf multicannon so it will kill enemies for the player. The reasons behind this are typically a lack of knowledge of the game or the rules of the game, meaning that level does not necessarily come into it, though some people do this on purpose simply to annoy members of the opposing team. It may also be used to describe someone who simply acts stupidly, regardless of their experience. It can also refer to a player who has been playing for a while but because of some blunder can not become skilled at the game.

As the word "noob" is used so often, over time, it tends to lose its meaning and its offensiveness. Another usage for the word "noob" would be in the phrase "noob account", which describes a player's secondary account, usually with lower skills and combat level.

References in the game[edit | edit source] 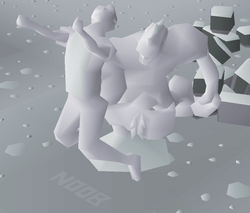 Jagex seems to have realised that noob is such a commonly used word, and they use it themselves sometimes. For example, in the God Wars Dungeon, the word "noob" is carved into the floor beneath a frozen body.

In RuneScape 3, "NOOB" is also an acronym for the New Order Occult Bookists, a small society found within the Wizards' Guild that studies Magic from old tomes.

Several times, a non-player character will use the word as a joke. Indeed, "noob" is such a common word that it is seen as one of the most common words used on RuneScape.