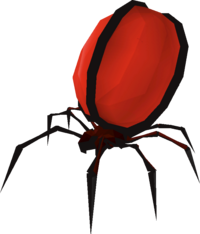 Nylocas Matomenos spawn during The Maiden of Sugadinti and Verzik Vitur encounters in the Theatre of Blood. They will heal the boss for their remaining hitpoints if they reach her, so binding them in place using ice spells is necessary to prevent massive amounts of hitpoints being restored.

The chance of freezing the Nylocas Matomenos scale based on the player's Magic Attack bonus, with a 100% freeze rate when it is at +140. However, other equipment can affect the freeze rate, such as Elite Void Knight equipment and the Augury prayer. Below are some examples that will guarantee freezing a Nylocas Matomenos:

Despite never attacking the player directly, casting Monster Examine will reveal that it has a stab attack style and a max hit of 11.