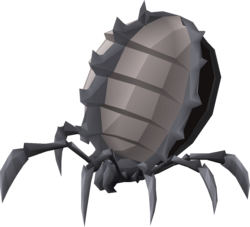 Nylocas Vasilias is the third encounter in the Theatre of Blood, and spawns after killing off the hordes of Nylocas Hagios, Ischyros, and Toxobolos. 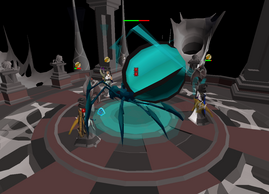 A trio of players fight the Nylocas Vasilias.

It changes its combat style throughout the fight by changing its carapace, which also indicates its weakness: blue for magic, green for ranged and white for melee. Attacking it with the wrong combat style will cause it to reflect the hit back towards the player as well as healing from the hit. It will change every 10 ticks (6 seconds), and it will always change to one of the other two styles (meaning it will not stay on one style twice in a row).

The first difference to regular mode in this room is during the hordes of Nylocas. A new demi-boss Nylocas Prinkipas will spawn 3 times in the middle of the room and has the same mechanics as the regular mode Nylocas Vasilias where it will recoil damage to players who hit it with the wrong attack style and heal itself. These don't attack the pillars and only target the players.

Not only that, every Nylocas fought during the hordes will inflict recoil damage to players using the incorrect attack style. But due to their low hp, they can only recoil their max hp (usually 9-11). Anyone using multi-hitting attacks such as Barrage spells or Chinchompas should be aware that they can very quickly kill themselves due to the recoil damage.

In addition to the above mechanics, Nylocas Vasilias in hard mode will fire its Ranged Attack at everyone stood within 2 squares of its target. It is advised to spread out with a 3-tile gap from other players in your party when it turns green.

Its Magic Attack also has a special mechanic where it will bounce off of the player it hits and will spread to every other player. This attack deals the same damage to every player it hits unless they are stood within 2 tiles of the original target. Otherwise the damage is halved. This can be devastating to a team if the target doesn't protect magic in time. It is advised to all stand close together when it turns blue.

In entry mode, all of the Nylocas in the encounter can scale down to 20% of their original Hitpoints when done in a solo party. Despite everything dealing lower damage however, this room can prove to be overwhelming to solo players who are not prepared since the number of Nylocas the players must kill during the hordes are the same. The room is still failed if all 4 pillars fall.

The boss takes longer to switch colours compared to regular and hard mode. This gives the players more time to switch their prayer and gear while fighting the boss.

The various colours of Nylocas Vasilias' carapace during the fight.