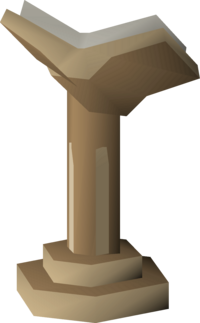 An oak lectern can be built in the Lectern space of the Study in a player-owned house. It requires 40 Construction to build and when built, it gives 60 experience. The player must have a hammer and a saw in their inventory to build it.

Lecterns allow players to store spells in Magic tablets for later use. When a tablet is broken, the spell is released as if the player had normally cast the spell.

An oak lectern may be used to create the following tablets: