From Old School RuneScape Wiki
Jump to navigation Jump to search
The RuneScape Wiki also has an article on: rsw:Oaknock the Engineer

Oaknock the Engineer was a gnomish inventor and architect and one of the gnomes' great heroes of their golden age, famous for building most of the Tree Gnome Stronghold.[1] He also developed many great technologies, many of which have been forgotten. Players will first learn of Oaknock while doing the The Eyes of Glouphrie quest, where it is shown how his machine dispelled Glouphrie the Untrusted’s illusion concealing Argento’s death. Oaknock died at some point before the current date of RuneScape.

He had multiple children, of whom Yewnock is famous for inventing the gnome glider based on the models Oaknock used to make.[2] The crystal saw is another of Oaknock’s inventions, based on his acquaintance with the elves.[3]

Not much is known about Oaknock's early history, but he was one of King Healthorg's advisers during the Grand Migration of the gnomes at the end of the Fourth Age, alongside the mages Glouphrie the Untrusted and Hazelmere the Ethereal. There was mutual enmity between Oaknock and Glouphrie, though.[4] 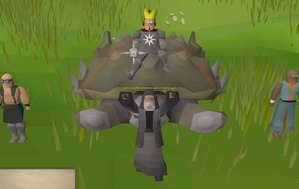 Healthorg and his people lived to the north of Baxtorian's elvish kingdom and Oaknock was said to socialise with the elves, taking inspiration from their crystal singing for his inventions. At one point, the elves all travelled west due to The Great Divide, leaving their former territory unoccupied. This led to conflicts between the gnomes and the goblins that were travelling north as a result of the Feldip Hills Civil War.[5] The so-called Goblin Wars culminated in the Battle of Atarisundri; whilst the gnomes were outmatched, Glouphrie's illusionary army of battle tortoises scared them off, leaving the gnomes victorious. 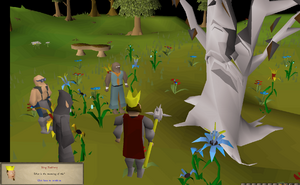 After this Grand Migration of the gnomes, they settled in what is now their Tree Gnome Stronghold. Oaknock was responsible for designing and building most of it.[1] He had a personal workshop in a cave (now Brimstail's cave) in the south-west of the stronghold.[6] His Aspidistra plant is still present in that cave, as are the elven-inspired crystal singing bowl and anti-illusion machine.[7] The Stronghold contained an old and wise silver spirit tree, Argento, who was a friend of Hazelmere's. One day, however, Hazelmere sensed his friend's death, although his outward appearance had not changed. Yet, the tree would talk to him no longer. He consulted Oaknock, who immediately blamed Glouphrie. The engineer prepared his elvish anti-illusion machine and summoned the King and his advisers to the tree.[8] The machine was switched on, revealing that Glouphrie had indeed concealed Argento's death, for which King Healthorg exiled him. Glouphrie and some of his companions left the stronghold and are said to have founded a city called Arposandra.[9]

The following takes place during The Eyes of Glouphrie.

Long after Oaknock's death, in 169 of the Fifth Age, the gnome mage Brimstail, now living in Oaknock's old workshop, sought to uncover the history of Glouphrie and the gnomes. He enlisted an adventurer's help to learn this history from Hazelmere, but whilst doing so, an invisible intruder sabotaged Oaknock's machine. It was repaired and subsequently activated, revealed the various cute creatures around the stronghold (including inside the workshop) were actually Arposandran spies. For their aid, the adventurer was gifted a crystal seed by King Narnode Shareen, which had been given by Oaknock to King Healthorg and passed down to subsequent kings and was intended for a hero of the gnomes. Using Oaknock's crystal bowl, the seed was transformed into a crystal saw.[10]