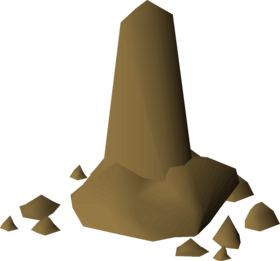 The Obelisk of Earth (aka Earth Obelisk) is used to cast the Charge Earth Orb spell at level 60 Magic. The spell is cast on the obelisk in order to charge an Unpowered orb into an Earth orb. The Obelisk is located in the Wilderness area of Edgeville Dungeon, south of the Black demons in the area where Chronozon is found.

When using this obelisk it is recommended to have a method of curing poison in your bank as the poison spiders can poison you even if you have Protect from Melee prayer on. If you are low combat level and afraid that the poison may kill you, you can bring a method of curing poison with you at the price of having fewer orbs in your inventory. Alternatively, an Antipoison potion that grants immunity can be sipped at the bank right before you head to the obelisk as well. For instance, an Antidote++ dose will grant 12 minutes of immunity, which is roughly 3-4 trips.