Obor, the Hill Titan, is the hill giant boss residing in his lair, located in the locked gates found at the western wall of the hill giant area in the Edgeville Dungeon.

In order to access Obor's lair, the player must obtain a giant key from a Hill Giant. Each giant key permits one entry to the lair and one attempt to fight Obor. If you change worlds while in the instanced zone, you will be teleported outside the gate.

When the player first enters Obor's lair, they will be in a safe zone, where they must climb down the rocks in order to fight him. Obor attacks with Melee and Ranged. 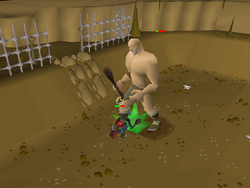 An easy strategy for lower-level players (with

40 Prayer) is to always turn on the Protect from Missiles prayer BEFORE climbing down, and then using Snare to prevent Obor from reaching you. Cast Snare every time Obor is able to walk again. Use Magic to kill him. For better chance at success, wait for Obor to be as close to one side of the room before Snaring, then run to the other side, casting offensive spells in between. Wait until he walks to the opposite wall again before repeating. Even with this strategy, however, bring enough food, as Obor can do serious damage as soon as the Snare wears off. If you are free-to-play you might want to bring an energy potion as well.

It can be useful to know that Obor does not always keep walking up to melee distance before attacking, but never attacks when unable to move. This means he might stop walking towards you before standing next to you, giving you the time to snare or bind him without having to run to the other side of the arena. This makes it easier to cast more spells in a shorter amount of time, making the fight more efficient.

As Obor is weak to magic, this is the preferred combat style for members with at least

60 Defence and 42 in the other combat stats. Players with 75 Magic should use the Trident of the Swamp as Obor is susceptible to poison. You should wear void knight or elite void knight equipment with the void mage helm. Stand with your back against a wall to avoid knock-backs. Pray a Defence-boosting prayer such as Steel Skin. Expect to take more damage using this method.

Discouraged for free-to-play as they do not have access to decent armour and weapons. Members with

75 Ranged should use a Toxic Blowpipe as Obor is susceptible to poison.

Melee is also a good option, as it is faster than the magic method (trap) to kill Obor, but it will be more dangerous. At least level 50 Attack/Strength/Defense and 40 Prayer for Protect From Missiles are recommended. Obor's slam attack can knock you back, and your next attack will be slightly delayed whether you are standing next to a wall or not. Members can use an Abyssal whip or a Dragon scimitar, while free players can use a Rune scimitar. You'll also want good melee armour with decent ranged and decent defensive melee stats. If you are free-to-play, you may also want to bring a Strength potion.

Drop rates estimated based on 817,368 kills from the Drop Rate Project, unless otherwise cited.