The Observatory Quest is a quest where you must help the professor of the observatory repair the structure and restore it to its former glory. 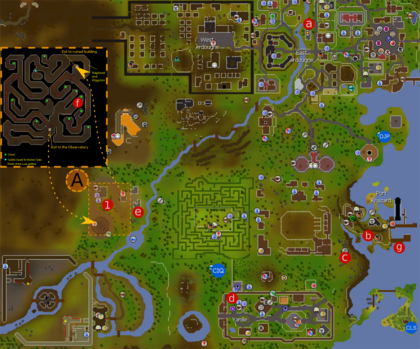 Once you have these three items, bring them back to the professor who will take them from you. He then says that he needs a mould so that he can make a new lens.

Note: Make sure to talk to the professor three times and give him the molten glass, bronze bar and three planks before attempting to inspect the stove; otherwise, you will have to lure or kill the guard again for the key.

If you don't have antipoison potions, you can pick up one Superantipoison at the spawn in the south-eastern building. Go down the stairs to the east of the reception room to find the Observatory Dungeon (the room with the stairs is directly east of the start point). Once down the stairs, you must find the goblin kitchen key. It is commonly found in the south-eastern most chest although it can vary from person to person. Search any chests you pass on the way to the south-eastern chest just in case. Keep searching the chests (refer to the map) until you find the key. Once you search the correct chest, make sure you complete the dialogue for taking the key or else you will not receive it and will have to return to the chest.

Sometimes there may be a poisonous spider (level 31) inside the chest in which case run away quickly or you may get poisoned.

Now that you've got the key, head all the way back to the kitchen gate (take the north-eastern path from the stair entrance), and "prod" the sleeping guard (level 42). He will wake up and attack you. You can either defeat him or get him stuck behind a wall.

Note: Getting him stuck behind a wall will allow you to go through the door. However, if you pass the goblin again, you will be attacked. Also, another goblin will spawn asleep. You can fight multiple goblins.

Open the kitchen gate (you will use the key and discard it), and then inspect the goblin stove. You determine the goblins are cooking something foul in the lens mould. Dump out the stew and bring this back to the professor.

His assistant will ask you not to give it to him, as last time the professor attempted to craft something, the explosion took a week to clean up. The professor agrees and gives you back the molten glass and mould.

Use the molten glass with the lens mould to craft him a new lens. Give it back to the professor. He will want you to visit him in the Observatory.

Climb back down the stairs into the Observatory Dungeon. Now, instead of taking the south-east path, follow the north-west passage (past the kitchen) to find some stairs leading to the Observatory (the southern set of stairs on the map). There is also a chest north-east of the stairs to the Observatory, which spawns infinite Antipoison(1) vials, which you can combine to make full vials.

Go up the stairs, and a cutscene will play. After the cutscene ends, go up the stairs and talk to the professor, and then "view" the telescope to see a constellation.

Looking through the telescope. 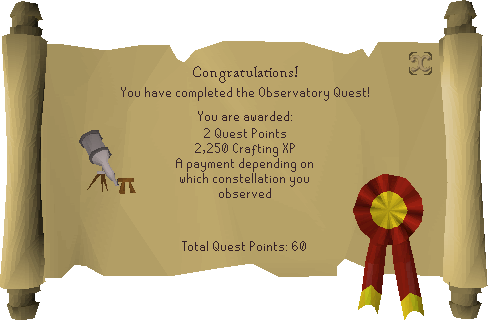