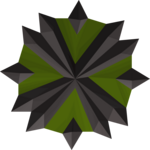 An odium ward is a Ranged shield requiring 60 Defence to wield. It is the third best Ranged Attack and Ranged Strength bonus in the shield slot, succeeded by the dragonfire ward and the twisted buckler. It is created at the Volcanic Forge in the Wilderness with an odium shard 1, odium shard 2, and odium shard 3, dropped by the Chaos Fanatic, Crazy archaeologist, and Scorpia, respectively.

The ward upgrade kit, purchased from Justine's stuff for the Last Shopper Standing, cosmetically enhances the odium ward, creating an odium ward (or). This only alters its appearance and makes it untradeable. This can be reverted but the kit will not be returned.

A player combines the three shards, creating the ward.