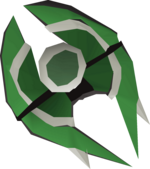 The odium ward (or) is an odium ward with a ward upgrade kit attached to it. The kit gives no additional bonuses, and is only used to add aesthetics to the ward. It costs 2,649,056 for both the parts to make the odium ward (or).

While the ward is untradeable in its ornamented state, it can be reverted anytime, returning the odium ward. However, the kit will not be returned.

If a player dies with the ward and it is not one of the player's protected items, the ward will revert to its default appearance, and players must use another ward upgrade kit to enhance its appearance again.