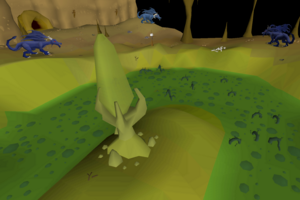 The Ogre Enclave, located southwest of Yanille and accessed via the cave in the market of Gu'Tanoth, is one of the few locations containing Blue dragons, and is visited during the Watchtower Quest. Below is a complete list of monsters found within the cave:

In the centre of the cave is the Rock of Dalgroth, which you can mine while completing the Watchtower Quest for the fourth crystal.

If returning to this cave after completing the Watchtower Quest, you will not need extra cave nightshade, as you can just sneak past the Enclave guards without it. Also, you do not need a light source when entering the cave unlike the other Skavid caves nearby.

To leave the cave, there is an exit in the centre of the north wall. It will take you to the north cave near the pathway to Gu'Tanoth.

If you have a slayer assignment from Konar in this cave, the nearest bank is in Yanille. One way to make bank trips is to run to the cave from the bank, and use the mini-game teleport for the Nightmare Zone to return.

As this is a popular area to kill blue dragons, there are several routes you can take to get to Gu'Tanoth. Below are some of the ways you can get there: