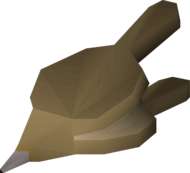 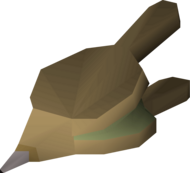 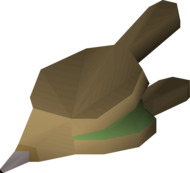 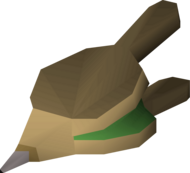 Ogre bellows are obtained by "unlocking" a chest locked with an ogre lock (i.e. pushing a boulder off from on top of it) in the north-west part of the cave (not on worldmap) in eastern Feldip Hills where the ogre Rantz and his son and daughter live, directly north from the quest start icon where Big Chompy Bird Hunting is started (fairy ring code AKS is nearby). Multiple ogre bellows can be taken from Rantz's chest.

This item is also needed for obtaining various Chompy bird hats, a section of the quest Recipe for Disaster, Mourning's End Part I and the western provinces diary.

The bellows are first filled with three loads of swamp gas from the swamp to the west. They are then used on the Swamp Toads found nearby to produce bloated toads. Only three toads may be carried at any one time in your inventory, though more than three may be laid on the ground. The now incapacitated bloated toad may be placed anywhere in the ogre area to attempt to attract a Chompy bird. When filling the bellows, your character will attempt to fill all the bellows in your inventory automatically.

Swamp toads that can be picked up cannot be used to fill ogre bellows. Attempting to do so results in the chatbox message stating "The chompy bird doesn't like this species of toad."

The location of Rantz's cave.