From Old School RuneScape Wiki
Jump to navigation Jump to search
The RuneScape Wiki also has an article on: rsw:Ogre boat
Ogre boat 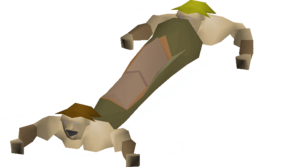 The ogre boat is a method of transportation unlocked during Recipe for Disaster, when the player attempts to rescue Skrach Uglogwee. It runs between the eastern Feldip Hills and just west of Tai Bwo Wannai, and is run by Rantz's children, Fycie and Bugs.

The path of the boat ride.

Passage from Feldip Hills to Karamja costs two raw or cooked chompy, while the reverse costs two "glug-glugs herbies"; the only type of herb they seem to accept is clean Snake weed, which can be harvested from marshy jungle vines found just south of the boat ride.

Players cannot ride the boat if they are carrying Karamjan rum. If players attempt to board the ogre boat with one in their inventory, Bugs will tell the player "Dad sez yous not bringin' da rummy stuff...das bad stuffsies un we get in big bads."