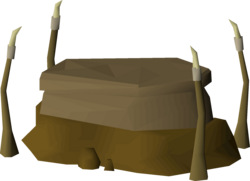 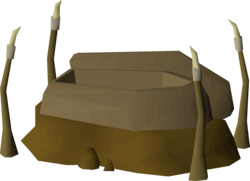 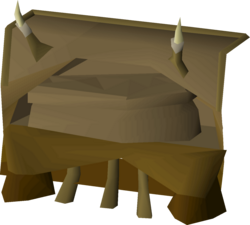 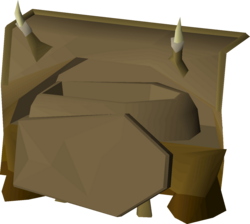 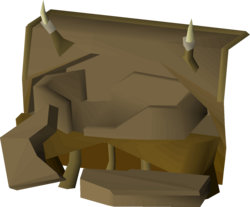 Ogre coffins are coffins located in the level one basement of Jiggig and just outside Jiggig directly south.

Accessing Ogre coffins requires partial completion of the quest Zogre Flesh Eaters. Attempting to pick-lock the chests before starting the quest will result in an Ogre guard telling you to speak with Grish.

The coffins can be opened by either of two means:

You attempt to pick the lock on the coffin:

You're knocked unconscious and dropped down a chute.
You slowly wake up in a strange place (you are in the level one basement of Jiggig).

The guards can be safespotted by hanging between the northern coffin and the centre coffin allowing you to continuously pick the coffins without being caught.

The locks cannot be picked whilst in combat; attempting to do so will display the message, "You're in mortal danger, thieving is the last thing on your mind."

Each time you fail and your fingers get numb, your Thieving level will be temporarily drained by 1-4 levels. Note that this drain will stack with itself, and if your thieving drops below 20, you will not be able to pick the lock. Failure is frequent even for players with thieving levels in the 80s, so expect thieving ability losses. Lowered Thieving levels can be restored by drinking super restore potions.

Drop rates estimated based on 21,111 loots from the Drop Rate Project, unless otherwise cited.

The bones found in the Coffins give a very large amount of Prayer XP. These can be especially useful when used on a Gilded altar or taken to the Ectofuntus for the extra prayer bonus.

The chances are calculated using a sample size of 21,111.