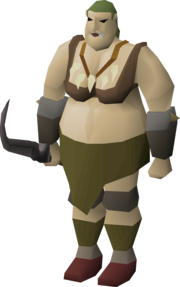 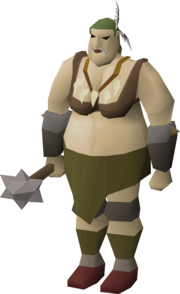 Ogress Warriors are found in the Corsair Cove Dungeon. They are a good way for free-to-play ironmen to obtain rune battleaxes and rune full helms, as well as law/nature runes.

Note that they have somewhat higher defence than lesser demons (especially magical defence), so 45+ ranged or 13+ magic is recommended if you are safespotting.

They can be used as an effective alternative to Ogres for a slayer task, as the Corsair Cove Resource Area entrance is typically not crowded on P2P worlds.

Drop rates estimated based on 118,259 samples from the Drop Rate Project, unless otherwise cited.

There is a 5/116 chance of rolling the uncommon seed drop table.

Each tertiary item can be simultaneously dropped, except for the Long bone and Curved bone, of which only one may drop.