Olaf's Quest is a quest about the unfortunate Fremennik Olaf Hradson, whose boat has crashed, rendering him unable to find his grandfather's treasure. You must help him find it and make sure his family does not find out about his failure. 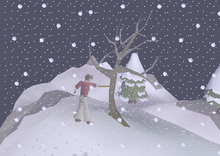 Talk to Olaf Hradson, who is north-east of Rellekka by the entrance to the snow hunting area and Keldagrim. Both the fairy ring with code DKS or the polar eagle are close to Olaf. He is miserable and damp and wants a favour from you. He will tell you about his attempt to live up to his family's reputation by becoming an expert explorer. Although he failed miserably, he wants to liven up his family's spirits and asks you to deliver some special carvings to his wife and son in Rellekka, pretending they are from a faraway land. Unfortunately, he only has damp driftwood on him, as his ship was allegedly smashed thrice onto the rocks in a huge storm. He directs you to the windswept tree up the mountain path to the east, from which you could obtain some dry wood. He promises you the treasure map he had been carrying in return.

Go up the snowy hill to the east and cut the windswept tree with any axe to get windswept logs. Once you bring the logs back, Olaf will make a crude carving for you to take to his wife Ingrid, telling you to say it's tribal or something, and an even cruder carving to give his son Volf (because 'children love planks' in Olaf's experience) back in Rellekka.

Olaf's wife, Ingrid Hradson, is found wandering around the well, just south-east of the longhall in Rellekka. You can take the agility shortcut at the eastern fence if you have 57 Agility or you can teleport to Rellekka using an Enchanted lyre or Fremennik sea boots. After you give her the carving (which you call the "Obscurian Tribal Artefact(tm)" and describe it as 'An expensive, exotic gift from the far-flung and tropical shores of the Island of Obscurity,' although it's log with "Olaf was here" carved into it), she will give you a loaf of bread in return for your troubles.

Olaf's son, Volf Olafson, is further north by the helmet shop. After you tell him that his father has sent him a very valuable gift from the Island of Obscurity, he exchanges the plank for a cooked shark. Save this in your inventory for later as Olaf will ask for food. 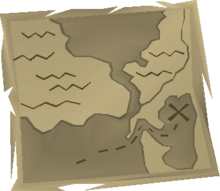 Talk to Olaf again, whose fire seems to have gone out. He is freezing but would rather die than return to Rellekka so soon and admit his lie. He will ask you to make a fire with some damp planks. Use them on the embers, and light it with your tinderbox (40 Firemaking required). After you make the fire, he will ask for food, having eaten nought but seaweed and biscuits for a week. Give him Volf's shark and he will admit the treasure map is probably cursed. He will give you the last map of his grandfather, Sven the Helmsman. It supposedly leads to his last treasure hoard, but Olaf has been unable to decipher the runic inscriptions. He wishes you luck on your search and decides to remain where he is for now to practise his carving and possibly starve.

Note: Olaf will ask for a piece of food from you in exchange for the map, but you will provide it regardless of whether or not you agree to this. If you have any food in your inventory that you don't want to lose (such as summer pies if you brought them for later, OR any food given to you by the quest NPC's), drop them before talking to Olaf and pick them up afterwards to prevent the risk of losing them. You only have to give him one piece of food.

Read Sven's map. It depicts the precise area where you are. The X represents the tree up on the hill that you visited earlier. Dig next to the same windswept tree on the hill from earlier and you will fall into a cave. 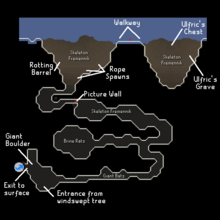 There is a boulder here that you may roll up to exit the cave. However, this is a one-way exit and using it will place you by Olaf. You will have to climb the hill and dig by the windswept tree in order to reenter. This is the same exit that you are sent to if you fall off of the slippery bridge later in the quest. Head east and north in the cave. Players may kill a brine rat en route to complete a task in the Medium Fremennik Diary (47 Slayer required).

A picture of the completed puzzle.

Once at the picture wall, kill a level 40 Skeleton fremennik to get a key, or you can wait and kill one once you're in the room past the puzzle door (explained below). Crumble Undead is useful to kill the skeleton quickly.

Search the picture wall to find a puzzle on it that must be solved by pulling levers. The pieces must be rotated to get an image of a skull and crossbones. The top lever turns the top and left circles anticlockwise. The left lever rotates the left and bottom circles. The bottom lever rotates the top and bottom circles. Finally, the lever on the right rotates the left and right circles. Once the image is correct, pull the horizontal lever at the very bottom.

The levers in order are: right, up, left, down, and then the very bottom.

Attaching a rotten barrel to the walkway.

Inside the next room, you will find ropes and rotten barrels that can be picked up. Take two barrels and, if you haven't brought them with you, six ropes. If you brought an agility potion or a summer pie, drink or eat it here to boost your Agility level. Cross the bridge to the north-east and use a barrel on the broken section of the bridge to fix it. Do this again on the next broken section. You may slip and fall off the bridge. If this happens, you will appear just north of Olaf and will have to climb up the hill by the windswept tree and dig to enter the cave again.

If these numbers are accurate, then

The gate and its subsequent puzzle.

There is a locked gate in the middle of the bridge. Try to open it, and you will be shown five different locks. If you fall after you opened the gate you will have to collect a key again from a Skeleton fremennik nearby. Choose the one that matches the loop of your key, and the gate will open. If you lose your key, or fall off after the door, but before you complete the rest of the bridge, you will need to kill another Skeleton fremennik to get another key to be able to get back through the door. 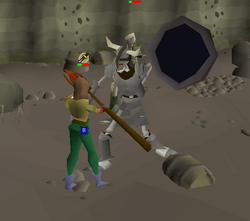 Once through the gate, make your way to the end of the rotten bridge. Again, you can fail, in which case you are washed out of the cave. The final section of the cavern contains a rotten shipwreck containing a treasure chest.

Using Ulfric's grave as a safespot.

Attempt to open the chest. A level 100 skeleton named Captain Ulfric will appear from a grave. He uses only melee and you may use his grave as an obstacle for a safespot. It is worth noting that he can teleport to you during the fight. Although the undead Fremennik is strong and accurate, he only has 60 Hitpoints and can be killed quickly.

One strategy is to only bring runes for Crumble Undead and/or a salve amulet (or its stronger variants) as both Ulfric and the skeleton fremennik fought earlier are undead and you can fight them with no armour using Protect from Melee.

After defeating Ulfric, search the chest again to claim Sven's treasure and finish the quest. 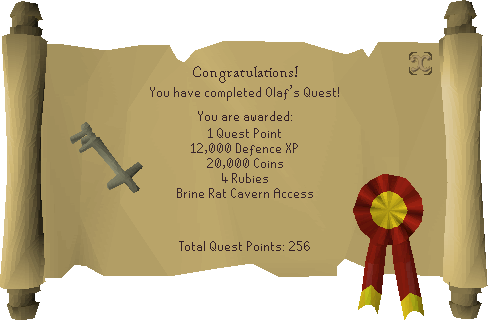 Completion of Olaf's Quest is required for the following: