Similar to Deadman Mode, every player in Leagues starts without stats or items, and progress in Old School RuneScape is not affected. Progress made within a League does not carry over to the next League, with the exception of pets, league-to-league rewards, and league points for purchasing those rewards (but not in-game points for relics).

The first Old School RuneScape League was the Twisted League, which started on 14 November 2019 and ended on 16 January 2020. Players were restricted to Great Kourend and the Kebos Lowlands. Players had a 5x accelerated xp rate and were not able to trade with other players.

The second Old School RuneScape League was the Trailblazer League, which started on 28 October 2020 and ended on 6 January 2021. Players started off in Misthalin and could visit Karamja after completing the tutorial. Magical barriers prevented travel to the other areas until players unlocked them by completing a fixed number of tasks. Out of a total of 9 areas, players could unlock a maximum of three for a total of five. Trailblazer League also introduced passive relics that were automatically unlocked when reaching the next relic tier. The league XP multiplier began at 5x and increased to 16x at relic tier 6. Item drop rates were also increased to a maximum of 3x after unlocking the tier 5 relics.

The third Old School Runescape League was the Shattered Relics League, which started on 19 January 2022 and ended on 16 March 2022. Rather than regional restrictions, players had access to the entire map while select Skills and Bosses were locked behind a point system. Shattered Relics League introduced a new system for automatically completing quests by spending league points. Relics had also been changed and split into fragments which could be obtained by completing various activities. Individual fragments offered weaker effects than relics from previous leagues, but they could be combined to create powerful sets of buffs. 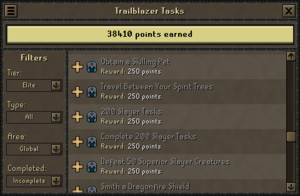 Tasks are a collection of goals that players can complete within each league. Tasks span a variety of activities such as obtaining rare drops, defeating bosses, completing quests, and obtaining level milestones. Completing a task earns players league points based on the difficulty of the task. League points allows players to unlock content such as relics, areas, and more, depending on the rules of the league. A special interface was created to browse and filter tasks based on difficulty, type, area, and competition for Trailblazer League.

The Twisted League tasks were available for all players to complete, since the content restrictions were applied to everyone equally. However, the tasks in Trailblazer League were divided into area-specific lists and a general and multiple areas list. Players could only complete tasks in the areas which they had unlocked. There was a total of 495 tasks with 91,080 available points in Twisted League, while Trailblazer league had 963 tasks with 115,770 total points. 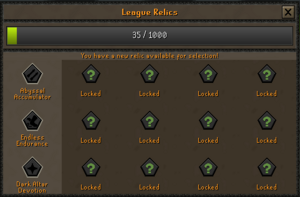 Relics are a league specific source of buffs which were unlockable with league points in Twisted and Trailblazer League. Relics can be boosts to XP, buffs to combat prowess, additional gathering resources, production boosts, unique transportation options, and more. In the first two leagues, players could choose from three relics for each tier they had unlocked. Relics were locked in after choosing and could not be changed later.

In Twisted League there were 5 tiers of relics, and Trailblazer league added a 6th. Trailblazer League also added passive relics that were unlocked automatically when reaching the next tier. The passive relics provided infinite run as well as boosts to the XP and droprate boosts.

In Shattered Relics League, relics have been shattered into fragments and scattered. Fragments contain a small portion of a relic's power, but they can be combined to create powerful effects. Players will be limited to a set amount of active fragments at a time, and they can be freely exchanged inside a bank. While completing various activities such as skilling, bossing, and clue hunting, players will have the chance to obtain fragments related to that activity. The chance to acquire a fragment is based on activity and is scaled by the amount of XP acquired.

Although players compete the traditional way on the HiScores, there are also unique tasks separate from league tasks that can only be completed by a single player (or team). League Firsts tasks range from PvM tasks such as being the first to defeat TzKal-Zuk, luck based tasks such as obtaining a pet, or skilling related tasks such as achieving the first level 99.

Players who achieve a League First have their name permanently recorded on the League Firsts Board next to the Leagues Tutor in the Lumbridge Castle courtyard.

The following rewards only affect League worlds and carry over between Leagues.

In trailblazer league, players were able to claim the following rewards from Twisted League based on their placement:

Starting gear and additional veteran worlds for players based on their previously achieved tier beyond bronze and up to rune were proposed, but not implemented.

When leagues have finished, players may use previously earned league points to purchase cosmetic rewards that can be used in the permanent game mode. The points from all previous leagues are combined and all the rewards from previous leagues are available for purchase.

League trophies are automatically rewarded based on the player's placement on the HiScores at the end of the league. These are untradeable and currently unobtainable after the league is finished. There are seven tiers of trophies from bronze to dragon and they can be wielded or displayed in the League Hall in a player-owned house.

While Old School RuneScape does not aim to have discontinued items, the trophies may be seen as such, since they are a different set of items each league and cannot be obtained once the event is over. A similar problem would occur if leagues cease to run each year, which would prevent new points from coming in to purchase items from the rewards shop.

However, it has been expressed that any main game rewards would be accessible by other means in the event that no more leagues are held.

Developers have also expressed the desire to rerun older leagues in the future for another chance at those specific trophies, and when the content of the game has updated thoroughly enough for the experience to be different enough to encourage new strategies the next time around.