On 24 November 2021 a closed Android beta ran until 8 December 2021. This beta was for initial feedback on testing features introduced in the Steam Client that will eventually be rolled out on the mobile version; this closed beta was in preparation for an open beta that launched in 28 February 2022,[5] with a closed beta rolling out for iOS in April 2022 afterwards.[6]

The mobile client has suspend and resume support which will keep players logged in but idle (for as long as they would be in the desktop client) if the player switches to another app, e.g to take a phone call; however, this may vary between the type of phone the player uses. Additionally, players who log in to the mobile client once will be able to login subsequently through the same device without the need to enter their username and password. This active session can be disabled by tapping Log Out in the Main Menu or through the player's Account Settings.

The interface displays some features that are exclusive to the mobile client. 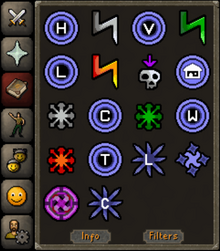 The spellbook interface on the mobile client, having filtered Utility spells.

Players on the mobile client may check the level and runes required to cast a spell by tapping the Info button on the bottom of the spellbook interface, then tapping the desired spell.

If players use enough filters to significantly decrease the number of spells displayed, the spell icons will become enlarged to make them easier to tap.

There are several settings that are exclusive to the mobile client, in addition to those that already exist on the desktop client.

This menu is for graphical settings. It contains a slider and several toggle buttons. It does not contain the Resizable screen and Advanced Options interface, and is replaced by other options.

This menu is for adjusting how the game is controlled. Mouse options and keybinds are not displayed in the mobile client.

If the function button is enabled, it will appear directly above the Combat Options tab. Once tapped, a chatbox will appear, prompting players to select a function mode:

At RuneFest 2017, players had the chance to play Old School RuneScape Mobile on the live servers.

Players were able to sign up to express their interest in joining closed tests. Selection for participation was based on account standing and device type.

An open beta test for Android was released on 5 July 2018, via an app available on the Google Play store. Although free to download, only players with a members subscription were be able to sign in and play. An open beta for iOS was released later in Summer 2018.[7]