One Small Favour is a humorous quest in which you are asked to complete a favour, although things turn out to be less simple than that.

Players are advised to read through each section before starting, as there are many different teleportation options that will vary by player and will determine items required before banking again. Players are also encouraged to complete as many stages of this quest as possible without any combat gear equipped, in order to preserve energy for running (as there is a lot of ground to cover). The walkthrough will alert you if there are any impending encounters where any combat items may be necessary.

Items required: A good pickaxe and a charged Amulet of glory to mine the gems (with 40 mining), a chisel, and some form of teleportation to Port Sarim. One easy option is to bring 45gp to purchase a ticket from Captain Shanks (explained below), or other ways to get to Port Sarim are: an Amulet of glory to Karamja, a Rimmington tablet/house teleport, Explorer's ring 2 or higher, or the Ratcatchers minigame teleport. There is also the fairy ring code CKR, which teleports you close to the wall of Shilo Village by the gem rocks.

Items required: Skills Necklace (optional) or Falador teletab (optional),[n 1] a charged Amulet of Glory (optional), a Varrock teletab or teleport (optional), Skull sceptre (optional), 3 steel bars, a harralander, 2 guams, a marrentill, a bowl of hot water, a pot (can be obtained if you don't have a bowl of hot water ready, and you want to heat a bowl of water), an empty cup (You may obtain a cup of tea during this part, and drink it), a Camelot teletab or teleport, a lockpick (recommended for those with a low Thieving level), Blunt Axe given by the Jungle Forester. 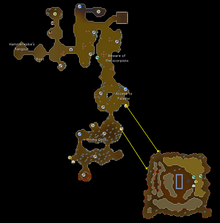 Hammerspike and company is located on the far west end of Dwarven Mine.

Items required: 1 empty inventory space, 5 pigeon cages (can be obtained while in Ardougne), coins, a Camelot teletab, an Ardougne teletab, a Skills necklace or Combat bracelet to teleport to the Fishing Guild, a ring of dueling, a chisel and a hammer. (Optional) 2 cut jades, opals and red topazes. (2 extra uncuts of each gems can be provided by the gnome for 500gp each. You will obtain 2 sapphires which cannot be crushed while cutting so extras are not needed.) 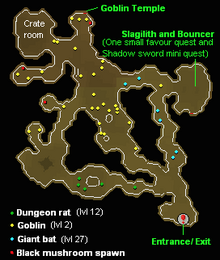 Petra is located in the same room where Bouncer and Slagilith are found.

Others Items required: A good pickaxe/weapon, armour and some food, a hammer, a bronze bar, an iron bar, a steel bar, 5 pigeon cages, runes for teleports to Ardougne, Camelot, & Lumbridge, transportation to Taverley, Skills Necklace, Skull Sceptre, and coins for transportation or some means of teleportation to get back to Shilo Village. (Bring an extra piece of soft clay if you want to save some time during Swan Song later)

The player misfires the spell and animates Slagilith. 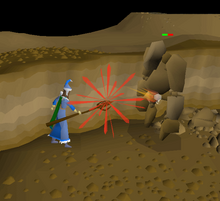 A tussle with Hammerspike's gang.

Finally back on Karamja[edit | edit source] 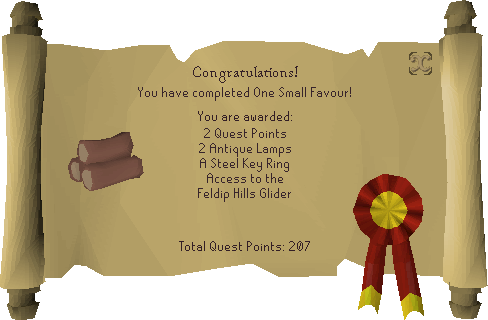 Completion of One Small Favour is required for the following: