She is located near the Astral Altar on the south-eastern edge of Lunar Isle.

When the player first meets her, she agrees to allow them to undergo the Waking Dream ceremony, so that a member of the Fremennik tribe (the player who became a Fremennik during The Fremennik Trials) may understand what it is to be a member of the Moon Clan and hopefully reduce the tensions between the two peoples. She helps the player by providing information on how to get hold of the Lunar equipment needed to complete the ritual, and will then brew the player a Waking Sleep Potion so that they may enter their dream and face the trials. Once the player completes the ceremony she will grant them permission to pray at the Astral Altar to activate Lunar spells.

During Dragon Slayer II, players ask for her help with recovering memories of Bob as Robert the Strong, and suggests that they make a dream potion the same way they did during Dream Mentor with Cyrisus. 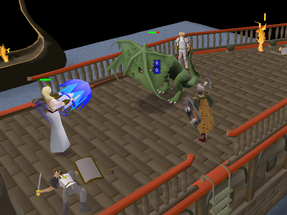 The Oneiromancer and Sir Tiffy Cashien fight against a brutal green dragon.

Once Zorgoth has been freed from the Lithkren Vault, she is asked to attend the emergency meeting in Varrock along with other leaders of various kingdoms.

During the dragon assault, she fights alongside the player, fighting against a brutal green dragon with Sir Tiffy and assisting the player against the adamant and rune dragon.

If at any point the player were to lose their Lunar equipment, they can return to the Oneiromancer where she will return it for a price. The prices are as follows:

The total cost to purchase the entire set from the Oneiromancer is 283,000 coins.

Oneiromancer is the solution to the elite anagram clue: CAREER IN MOON. She will give you a Challenge scroll with the answer of 25.