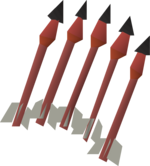 Onyx dragon bolts (e) are onyx dragon bolts that are enchanted via the Enchant Crossbow Bolt (Onyx) spell by a player with level 87 Magic. The spell enchants 10 bolts per cast, and uses 1 cosmic, 1 death, and 20 fire runes.

Enchanted onyx dragon bolts have a chance of triggering the Life Leech effect. This will deal 20% extra damage and heal the attacker's Hitpoints by 25% of the total damage dealt. This does not work on the undead, as they have no "life" to leech.