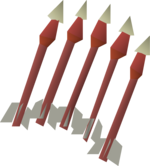 Opal dragon bolts (e) are opal dragon bolts that are enchanted via the Enchant Crossbow Bolt (Opal) spell by a player with level 4 Magic. The spell enchants 10 bolts per cast, and uses 1 cosmic and 2 air runes.

Enchanted opal dragon bolts have a chance (5%) of triggering the Lucky Lightning effect, which results in a lightning bolt striking your opponent and causing extra damage equal to 10% of the attacker's visible ranged level. For example, at 112 ranged level extra damage is 11.

If the player has completed the Hard Kandarin Diary, there is a 10% increase (5.5%) of the likelihood that the special effect of an enchanted bolt will occur. This effect is always active regardless if the headgear is equipped.