From Old School RuneScape Wiki
Jump to navigation Jump to search
The RuneScape Wiki also has an article on: rsw:Operation: Phoenix 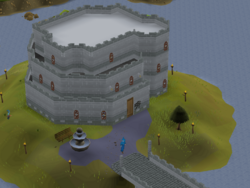 Operation: Phoenix is the name given to what is claimed to have been an organised attack by Zamorakian wizards against the first Wizards' Tower.[1] The operation supposedly took place in the year 70 of the Fifth Age,[2] and ultimately resulted in the complete destruction of the tower and the loss of many magical secrets. The event, though referenced frequently throughout RuneScape's history and dialogue, has been referred to by name only once, in a Temple Knight commorb dossier obtained during the Wanted! quest.[3]

After the incident, the Wizards' Tower was later rebuilt. All that remains of the original tower is the basement.[10] The make-up of the wizards present in the tower changed as well. Only Saradominist mages are now members of the order,[11] and the Zamorakians were banished from the tower.[12] The modern Zamorak Magical Institute is believed by the Temple Knights to be descended from the Zamorakian mages originally responsible for the plot.[3]