From Old School RuneScape Wiki
Jump to: navigation, search
The RuneScape Wiki also has an article on: rsw:Organ
This article is about the POH organ. For the organ found in churches, see Church organ.
Organ 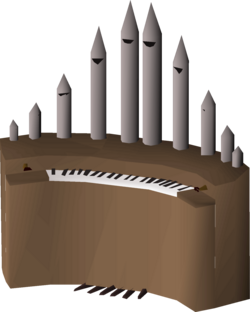 An organ can be built in the Musical space of the Chapel in a player-owned house. It requires 69 Construction to build and when built, it gives 680 experience. The player must have a hammer and a saw in their inventory to build it.

The organ can be interacted with using the 'Play' option, but, unlike the windchimes and the bells, the sound can only be heard with music option on. If you play the organ in your player-owned house, then leave, it would still be playing until finished.

Bells can be heard while playing the organ, despite no bells being present on the instrument. This is likely due to the presence of tuned percussions such as glockenspiels or carillons on many real-life pipe organs, which while instruments in and of themselves, are often considered part of a single, larger instrument.