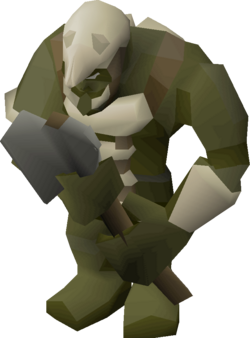 Orks are stocky, green-skinned humanoids. They have small tusks protruding from their jaws, and prefer to wield large axes and/or maces.

Orks can be found in the God Wars Dungeon, in the army of Bandos. These Orks are notable as the most reliable soldiers in the army of Bandos, as they can hit up to 12 health points. Players should also beware that if they kill an Ork, all nearby Orks will become aggressive to the player. Also, if players have dealt damage to an ork which is eventually slain by other monsters, the orks around would still become aggressive. The strength of the ancient Orks is unusual, but all the recently-thawed combatants in the dungeon are stronger than their modern versions. It is unknown if they truly worship Bandos as their patron god, were forced into service like the goblins, or simply fight out of entertainment rather than loyalty or necessity.

Orks also appear at a certain point in A Fairy Tale Part 2. The Fairy Godfather is trying to replace the Fairy Queen and the fairies with Orks. Some of these Orks have no shown level, and some are level 20, but neither type can be attacked. They can be talked to, but all they say is "Grunt! Smelly, stinky human! Urgh! Leave us alone before we hurt you."

Orks are good for training melee at high levels. One should bring prayer potions and pray protect from melee while fighting them, and restore prayer as necessary. They will continue to be aggressive after you have slain an Ork.

Despite their high combat level, orks only drop lower level combat metals such as bronze, iron, and occasionally steel. However, they do drop level easy and hard clue scrolls.