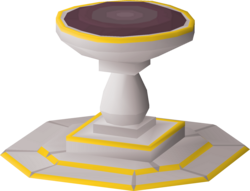 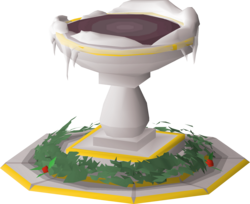 Players can restore their Hitpoints, special attack, run energy, Prayer points, and any reduced stats; and cure disease, venom, and poison. The pool cannot be used if the player was recently in combat. It requires 90 Construction to build, but can be built at 82 Construction through the use of a crystal saw and a +5 spicy stew boost.

87 Herblore (boostable) and completion of Regicide is also required up to the point of reaching the Tyras Camp, as the only source of anti-venom is to create it through Herblore, which requires Zulrah's scales.

It is extremely popular among players, as it functions similarly to the Pools of Refreshment (with rings of dueling) and Elidinis Statuette (with the desert amulet 4) in the player's own house, and requires a much lower time investment than the desert amulet 4.

The experience shown is the total amount accumulated from the base furniture to this built furniture.