Osman is the head spy master of Al Kharid and can be found just outside the palace. He plays a significant role in the quests Prince Ali Rescue and Contact!. He also makes an appearance in the first cutscene in the Recipe for Disaster quest. He is very skilled at espionage and subterfuge and politically very astute. Additionally, Osman has shown himself capable of holding his own in combat against dangerous creatures, armed with a scimitar.

Replacement Keris daggers can be bought for 20,000 coins after finishing Contact!, if the one initially picked up at the end of the quest be lost. If the dagger was never claimed during the quest in the first place, Osman will supply it free of charge.

He also rewards players with Thieving experience in exchange for Sq'irk juice, which players can obtain in the Sorceress's Garden minigame. In order to start the minigame, one is required to first speak to Osman about it.

Little is known about Osman's past or private life, seeing that such information would benefit the enemies of the Emir.[1] He is known to have done some adventuring when he was younger, though.[2] He subsequently settled in Al Kharid, where, apart from his duties as spy master, he indulged in his love for sq'irk juice, befriending a local sorceress, Aadeela, who grows these fruits in her magical garden, which he frequently visited.[3] They had a falling out over the prices, however, upon which the angered Aadeela denied him access to her garden and hid its location. He has been unable to find it since, and misses his sq'irk juice.[4] In fact, Aadeela seems to hold a grudge, denying all of Osman's spies access to her garden.[5]

In his capacity as chief spy, he has been responsible for many acts of espionage; particularly relating to Sophanem and Menaphos, which have long been an enemy of Al Kharid. He says he has often been in the cities, performing 'many a dark deed.'[6] Although there is currently a shaky peace between the two city-states, he has indicated that there is much bad blood between himself and the Menaphites. He is certain he would be recognised if seen, which would flare up the hostilities between the kingdoms.[7] In fact, he claims he would be 'lynched on sight' if seen near the capital, which is why he no longer operates in the area himself, instead opting to despatch members of his spy network.[8]

During one of Osman's investigations, his team discovered a supply of keris daggers somewhere, enchanted to be especially effective against Kalphites and Scabarites.[9]

In the year 169, Prince Ali, the Emir's son, was kidnapped by the infamous Lady Keli, causing the greatly upset Emir to retreat to his private chambers. Osman unsurprisingly handled the case, sending his daughter Leela to Draynor to reconnoître the situation. She discovered that the prince was being gaoled near Draynor Village and informed her father of this. Meanwhile, Chancellor Hassan enlisted the aid of an adventurer to rescue the prince, and sent him to Osman. The spy master explained the situation and provided instructions: Lady Keli would have to be tied up and the prince should be disguised as her to fool the less-than-intelligent guards. He suggested a skirt and wig to mimic Keli, as well as something to make the prince's swarthy skin tone lighter. Moreover, an imprint of the cell key would have to be obtained so that Osman could fashion a replica from bronze.

The adventurer made his way to Leela, who said that Lady Keli has the key around her neck and her ego would have to be stroked for her to show it off, allowing an imprint to be made in some soft clay. With Leela's aid, the adventurer succeeded in creating an adequate disguise and obtaining a mould for the key. After being given this mould, Osman created a key, which he sent to his daughter. After tying up Keli and feeding the head guard drunk, the adventurer rescued Prince Ali. He was handsomely rewarded by the chancellor and Osman made note of him for the future.[10] Indeed, he recruited him to enter Aadeela's garden and bring him more sq'irk juice.

Around the same time, Ali Morrisane's associated from Pollnivneach came to Al Kharid and started harassing some of the shopkeepers there. Osman was informed and the elite guard were ordered to protect them.

Meanwhile, the city of Sophanem was stricken by a number of plagues, following which it was quarantined, as was Menaphos. Agents of Osman's that had infiltrated the desert capital instigated civil unrest, quite possibly related to the slave revolts that arose in Menaphos following the quarantine.[11] Indeed, Osman himself suggests that he is partly responsible for the quarantine.[12] It was soon discovered that the disease afflicting people and cattle was not contagious, after which Sophanem reopened its gates, but Menaphos remained locked down and was not open to discussion with its sister city.

One of Osman's agents, Maisa, was still stationed in Menaphos at the time, and the spy master despatched Kaleef to tell her how to get out.[13] He sent Kaleef through a system of tunnels beneath both cities where the Sect of Scabaras had made its home, but the man was slain by a giant scarab at the very end, leaving Maisa none the wiser. Meanwhile, the same adventurer that had rescued Prince Ali was now in the service of the Sophanite High Priest of Icthlarin trying to find a way into Menaphos in order to tell the Sophanites trapped there that it was safe to return home. He discovered the same tunnels and made it to the end, finding Kaleef's corpse and meeting Maisa, who was stood opposite a gaping chasm and was desperate to get out of the city.[14] 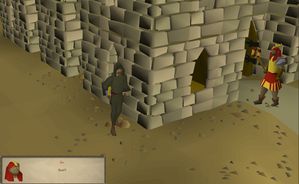 Upon being informed of Kaleef's demise, Maisa tested the adventurer's claimed acquaintance with Osman by asking him about the episode with the prince before deciding to trust him. She demanded that Osman come to help her in person. The adventurer agreed to arrange this, in return for which she would send word to the Sophanites in Menaphos that they could return home. The adventurer approached Osman, who was very much against the idea of his personally going to Sophanem and instead decided to send another agent. Suggesting that Maisa's helping the Sophanites, after all Osman's enemies, against the wishes of Menaphos might drive a wedge between the twin cities, giving Al Kharid leverage against the Menaphites in the future, convinced him, however, and he made his way to Sophanem, leaving a doppelgänger in Al Kharid to conceal his absence. 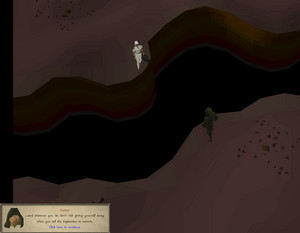 Osman met the adventurer outside the walls of Sophanem, stating that he was too old to scale the walls and that a disguise would be too risky. The adventurer informed him of a secret way in he had used prior and Osman told him to wait and only come look for him if he had not returned in two hours. He then sneaked into the city and fought his way through a swarm of giant locusts that had been plaguing Sophanem. He knocked out Jex, the custodian of the Temple of the Lesser Gods, with his blackjack and made his way into the temple's basement and Scabarite tunnels. Several hours later, the adventurer followed in Osman's tracks, as the spy had not yet returned.

He arrived near the chasm to see Osman conversing with Maisa, urging her to make sure that her identity was not compromised when speaking to the trapped Sophanites, when suddenly the ground started shaking violently. Initially dismissing the tremours as nerves on Maisa's part, he ordered her to quickly flee the scene when the quaking grew more intense. Maisa obliged, and several cracks appeared in the ground around Osman from which several scarab swarms emerged that coalesced into one giant scarab. The scarab attacked Osman, who was injured and decided to blend into the shadows. The adventurer slew the scarab, after which Osman returned and contentedly noted that Kaleef had pierced its shell with his keris dagger. He told the adventurer to take the dagger for himself, thanked him, and teleported back to Al Kharid.

Osman is attacked by a giant scarab.

Although wounded, Osman expects to recover fully and confirms that Maisa is also fine, although he would not divulge her whereabouts. Her mission was successful at any rate, as the Sophanite citizens managed to get out of Menaphos, and Sophanem began trading with Al Kharid (an opportunity seized by Ali Morrisane to sell junk to some of the Sophanites[15]).

As spy master of the Emir, Osman has many spies and agents in his service that operate mainly within the Kharidian Desert, although sometimes without if circumstances so require. Not all of his employees are familiar with one another, possibly because the network is so large or to ensure other members' security in case one were captured. The following people are known to work for Osman.

If the player loses the bronze key during Prince Ali Rescue, they can buy another from Osman for 15 coins.